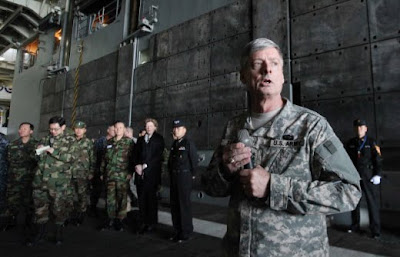 
Hankyoreh
USFK commander voices opposition about loudspeaker broadcasts
: U.S. experts have noted that the broadcasts may cause a rift with the U.S.
Posted on : Jul.7,2010 12:13 KST

United States Forces Korea (USFK) Commander Gen. Walter Sharp has reportedly expressed his virtual opposition to the South Korean Army’s plan to restart loudspeaker broadcasts at the DMZ aimed at North Korea. Sharp reportedly expressed this view when he met with Joint Chiefs of Staff Chairman Lee Sang-eui after the Lee Myung-bak administration’s announcement on May 24 of measures pertaining to the sinking of the Cheonan.

Multiple military sources connected to South Korea-U.S. relations said Tuesday that Sharp had doubts as to the aim and effectiveness of the loudspeaker broadcasts, and asked if there was a contingency plan should a firefight erupt between North Korean and South Korean troops. The sources said Sharp’s expressed opinion has been interpreted as opposition to the restart of propaganda broadcasts. Sharp reportedly expressed his opinion during a breakfast meeting with Lee in early June.

The military sources also said Sharpe expressed regret that South Korean military authorities did not confer with the UN Command, a party by international law to matters pertaining to the Military Demarcation Line (MDL), prior to the announcement of plans to restart the loudspeaker broadcasts.

Military authorities installed loudspeakers at 11 locations along the MDL after announcing a plan to restart loudspeaker broadcasts as part of the measures aimed at North Korea announced by the Lee administration on May 24. Actual broadcasts have thus far not restarted, and the plan to operate LED screens for psychological warfare use has been virtually canceled. A military source said cooperation between the United States and South Korean military authorities regarding psychological warfare operations has not been smooth.

North Korea has responded to South Korea’s plan to restart loudspeaker broadcasts through repeated threats. The head of North Korea’s delegation for inter-Korean military talks issued a threat to fire on the loudspeakers on May 26, and the North Korean military’s general staff threatened to launch a full-scale war and turn Seoul into a “sea of fire” on June 12.

Appearing before a parliamentary special committee on the sinking of the Cheonan on June 11, Defense Minister Kim Tae-young said in regards to the loudspeaker broadcasts that the ministry had decided to delay as both South Korea and the United States felt it would be best to start them after the UN Security Council finishes taking measures against North Korea. It appears the South Korea’s military’s reserved attitude on the matter was greatly influenced by the negative attitude of the United States.

In response, Donald Gross, Asia policy advisor to Barack Obama during his presidential campaign, stated through a column in the Hankyoreh on June 21 that the South Korean army’s psychological warfare operation could ignite a wide-ranging military conflict on the Korean Peninsula of which the end would be impossible to accurately predict. Cautioning that it would have the unintended effect of causing a fissure in the South Korea-U.S. alliance, Gross called for the plan to be indefinitely postponed or scrapped all together.

http://nobasestorieskorea.blogspot.com/2010/05/text-fw-defense-ministry-considers.html
Wednesday, May 11, 2010
[Text Fwd] Defense Ministry considers resuming psychological warfare against N.Korea
Posted by NO Base Stories of Korea at 10:24 PM