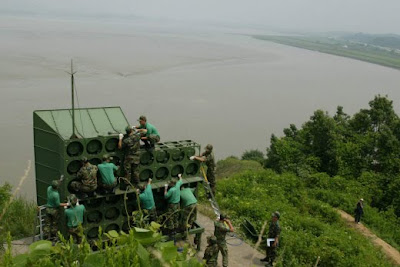 Hankyoreh
Defense Ministry considers resuming psychological warfare against N.Korea N.Korea and S.Korea agreed to suspend propaganda activities along the MDL in 2004
Posted on : May.11,2010 12:29 KST

Soldiers remove equipment used to make propaganda statements against the North Korean government at the MDL in Paju, Gyeonggi Province as a part of the agreement during general-level military talks on June 4, 2004.

The Ministry of National Defense announced Monday it is considering a plan to resume psychological warfare against North Korea. This would include announcements to North Korea along the Military Demarcation Line (MDL) as a measure in response to the sinking of the Patrol Combat Corvette (PCC) Cheonan. Such broadcasts have been suspended since June 2004. There has been concern that if South Korea resumes loudspeaker broadcasts to North Korea, it could result in a seriously detrimental effect on inter-Korean relations as a whole.

Defense Ministry spokesman Won Tae-jae said a working-level team was examining whether to restart psychological warfare against North Korea as part of research to cultivate various responses if the joint civilian-military investigation team looking into the sinking of the Cheonan finds that the ship was sunk by North Korea. He said the Defense Ministry plans to wait until the investigation results come out, and that nothing has yet been decided upon. Defense Minister Kim Tae-young reportedly directed the ministry last week to report how much time and money would be needed to restart the broadcasts.

Experts expressed criticism that resuming loudspeaker broadcasts would be an impromptu response, made with conservative domestic opinion calling for a hardline response in mind that would collapse the foothold of military confidence building that was assembled amid much difficulty. PeaceNetwork representative Cheong Wook-sik said that if South Korea restarts broadcasts, North Korea would respond. He said foundational measures for building military trust is not to slander one another, and if mutual slanderous broadcasts catch fire along the MDL, reducing military tensions and confidence building will disappear.

Moreover, in consideration of North Korea’s multiple warnings that if private South Korean groups did not stop sending leaflets condemning North Korea, it would have a negative effect on inter-Korean relations, there is concern that if South Korean military authorities restart loudspeaker broadcasts aimed at North Korea, inter-Korean tensions and confrontation could reach a point where from which they will be unable to recover.

U.S. State Department says OPCON transfer unconnected to Cheonan sinking
: Attention is focusing on James Steinberg’s comment as representative of the opinion at the U.S. Department of State
Posted on : May.12,2010
Posted by NO Base Stories of Korea at 10:14 PM