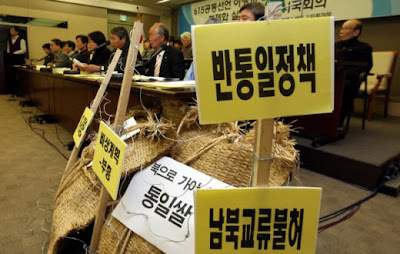 : The administration’s move to block humanitarian aid to N.Korea has also extended to private companies, private groups and international organizations.

Posted on : May.18,2010 12:16 KST
The delivery to North Korea of hepatitis vaccine to inoculate one million North Korean children and teenagers was abruptly canceled on May 14, when the Unification Ministry sent an official dispatch to government offices and ministries ordering the immediate halt of all North Korean projects funding from the government budget. The Unification Ministry was also confirmed to have notified private groups that it could not approve delivery of humanitarian aid items such as flour and bread that the groups were planning to send to North Korea.

It was confirmed that no raw material or subsidiary material deliveries by any of the hundreds of businesses commissioned to do processing and trade for North Korea had taken place following a Unification Ministry recommendation on May 11 for “refraining from goods delivery and new investment.” The Lee Myung-bak administration’s measures to block efforts directed at North Korea are spreading in all directions to include not only government projects but also indirect support and cooperation projects taking place through private companies, private groups and international organizations.

“On May 14, we had intended to deliver hepatitis vaccines for one million children and youths aged 16 and under in North Korea’s South Pyongan and North Pyongan provinces, shipping it from Incheon to Dandong in China, but we have not been able to send it because the related offices, including the Unification Ministry, directed us not to,” said a government official on Monday. “The plan this time was to send the vaccine to North Korea and monitor the situation early next month after the inoculations, but it has become impossible to go ahead with the project.” The vaccines are valued at 340 million Won ($296 thousand).

The hepatitis inoculation effort in question was a North Korean health and medical aid and cooperation project carried out in concert by the Ministry of Health, Welfare and Family Affairs, the World Health Organization (WHO), and international humanitarian aid groups like Caritas Internationalis, through discussions with the Unification Ministry. It targeted some five million North Korean children aged seven to sixteen who have not yet been vaccinated for hepatitis, and it was scheduled to receive a budget totaling some 4 billion Won, including contributions from the Inter-Korean Cooperation Fund and the Health Ministry’s independent budget.

The Unification Ministry’s decision to block delivery of the vaccine conflict with the remarks made at a briefing Monday by ministry spokesman Chun Hae-sung about humanitarian aid.
“There is no change in the administration’s position that humanitarian efforts and aid to disadvantaged classes in North Korea like newborns and small children will continue,” said Chung. “On May 14, we issued an official document to ten related offices and ministries, including the Ministry of Strategy and Finance, the Health, Welfare and Family Affairs Ministry and the Korea Forest Service, telling them that we would appreciate it if they would temporarily suspend North Korea efforts using the budgets administered by the respective office.”
In addition, the Unification Ministry is effectively blocking humanitarian aid efforts to North Korea by private groups, including deliveries of flour and bread.

“We were planning to send another 100 tons of flour to Kumsan Farm in Chunghwa County in North Korea’s North Hwanghae Province following an April 24 delivery of 100 tons, but we received notice from the Unification Ministry telling us not to carry out purchasing procedures, since they could not authorize the delivery,” said a World Vision official. The 100 tons of flour are valued at 30 million Won.

“An agreement was made with North Korea for an effort involving sending bread made in China to some 6,400 students at 105 kindergardners in Onsong County in North Korea’s North Hamgyong Province, and we were allotted 900 million Won last December from the Inter-Korean Cooperation Fund,” said a senior official with the Korean Sharing Movement. “The Unification Ministry, however, has refused to provide the funding without giving us any clear reason why,”

“It is not true that all deliveries to North Korea are being effectively disallowed,” said one Unification Ministry official, who also cited the approval granted on May 14 for the delivery to North Korea of 19 tons of flour valued at 5.8 million Won to be sent by the private group North-South Sharing.

“Inter-Korean relations are in a difficult and delicate situation,” said Minister of Unification Hyun In-taek. “Substantive measures for North Korea will be carried out around May 20 when the results of the Cheonan investigation are announced.”

“We will also make an announcement before June on our policy regarding the freezing of Mt. Kumgang real estate.”

Posted by NO Base Stories of Korea at 8:54 PM