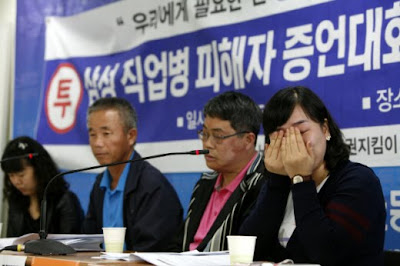 * Image source: Hankyoreh, May 17, 2010
'A copy of the Samsung Electronics semiconductor “environmental handbook” obtained by the Hankyoreh 21 contains some 50 types of chemicals and gases analyzed for harmfulness by a team of experts.' 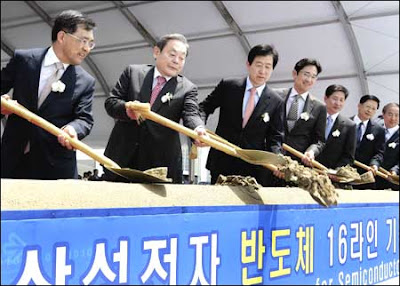 'The controversy over reported workplace hazard at a Samsung Electronics semiconductors plant that may have led employees to contract leukemia has been rising following the disclosure of an internal “environmental handbook” showing the use of six types of carcinogenic materials and more than 40 types of dangerous irritants.

For Issue No. 811 to be released Monday, the magazine Hankyoreh 21 obtained a copy of the notebook, which was provided to engineers in charge of process management at the Samsung semiconductor factory in Giheung. Some 50 types of chemicals and gases appearing on the list of “Factors Influencing the Environment for the Different Processes” were analyzed for harmfulness by a team of experts, including Seoul National University Graduate School of Public Health Professor Yoon Chung-sik and Catholic University of Daegu Industrial Health Professor Choi Sang-joon. The notebook in question was classified as top secret, and distribution outside the company was prohibited.

According to the analysis, a total of six carcinogenic materials were used in the semiconductor plant, namely trichloroethylene, thinner, sensitizing solution, dimethylacetamide, arsine (AsH3) and sulfuric acid (H2SO4).'

'Lee Kun-hee is back but this time, the leader of the Samsung business empire is no longer as shy of the limelight as before. As a matter of fact, he looks comfortable in it.

His latest appearance was made during Monday's ground-breaking ceremony for a new semiconductor production line together with his only son Jae-yong, widely considered his successor-designate, and Samsung's top management. It was timed with Samsung Electronics' unveiling of massive investment plans to the tune of 26 trillion won ($23 billion).

Samsung Electronics, now the world's largest technology company, unveiled plans for a dramatic splurge to jolt its memory chip and liquid crystal display (LCD) businesses this year.'
Posted by NO Base Stories of Korea at 2:48 AM