Text Fwd: The Statement on the Current State of Affairs for Peace on the Korean Peninsula 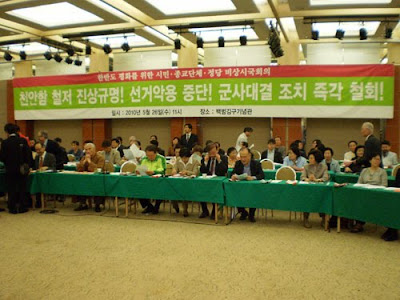 Please, find a statement below, issued by South Korean civil society, regarding the sinking of the Cheon-ahn navy warship. While no sufficient evidence on the direct involvement of North Korea has been found, the event is threatening to escalate with the neighboring countries getting involved. The Japanese government also started using this case as an excuse for strengthening the US-Japan alliance.

It seems like the S.Korean government will bring this case to the UN Security Council next week.

International Coordinator of Peace Boat US

We, Korean civil society, gather here today to overcome the crisis and conflicts caused by the Cheon-ahn incident and to take a major step forward toward our goal of democracy, co-existence and peace.

Since the South Korean Cheon-ahn navy warship mysteriously sank on March 26th, our society has grieved the tragic incident together, and tried to clarify the cause and to provide comprehensive countermeasures to prevent its recurrence.

Do you think that such impetuous and dogmatic measures by the Lee administration are helping to resolve the situation? Instead, those actions are shaking the very foundation of the systems of peace and prosperity, which would secure the future of the Korean Peninsula. Amid the international economic crisis, our economy was slowly recovering but now it is faltering again. The efforts of the Six-Party-Talks as well as the denuclearization of North Korea are missing in the Lee administration’s enforcements of military and economic countermeasures against North Korea.

People!
Did you witness such military tension when peace and engagement policies were consistently pursued in the past? Now we are at crossroads and need to decide whether to go back to the adventurism of the Cold War era, which the issue of security was ill-used for politics and blinded people to the truth. Or to take future-oriented peaceful realism, which emphasizes the democratic process, checks on the abuse of the administrative and military power, and seeks ways for peace and co-existence rather than provocative slogans.

In this regard, we express our opinions.

First, both North and South Korea should immediately stop the military confrontation, which will bring the Korean Peninsula to war and economic crisis. The South should withdraw its series of dangerous military measures and economic sanctions against North Korea, which were enforced without debates with the public, the Nation Assembly, and concerned countries. In addition, the North also should refrain from provocative rhetoric and radical military actions but instead cooperate with a rational process of uncovering the truth of the case.

First, we call on the South Korean government to take an additional measure to clarify the facts of the case, which should be able to answer a number of remaining questions regarding the sinking of Cheon-ahn vessel. In that regard, the National Assembly should be given a free hand in clarifying the truth and reviewing the investigations. Furthermore, an international investigation committee - including concerned parties, the United States, and China - should be established so as to ensure the credibility of investigation findings.

First, both the South Korean government and the media should not abuse this case, for the upcoming election, which is directly connected to the safety of people. The government and the majority party should explain if it was necessary to release the premature results of the investigation and to announce military countermeasures. In addition, we urge the government to immediately stop abusing its political and legal power to pressure the voters who raise rational questions to the government’s report and reactions.

We appeal to you!
The crisis on the Korean Peninsula took place without our intention, but we should be responsible to clarify the real cause and seek ways to resolve this problem in an appropriate way. It is directly related to our future of democracy and peace. It is time to call upon your wisdom and courage to achieve peace.

At 3pm, on May 29, let us show our will to uncover the truth and accomplish real peace on the Korean Peninsula. From today, let’s begin to light up candles for peace of the Peninsula, each and every night.

On June 2, election day we will judge the situations of the country and the time with a sense of ownership and open our future toward democracy, co-existence, and peace for ourselves.

The Coalition for Peace on the Korean Peninsula

Posted by NO Base Stories of Korea at 3:34 PM