Site Fwd: US Marine Training on Okinawa and Its Global Mission: a Birds-Eye View of Bases From the Air


Peace Philosophy Center
Wednesday, May 26, 2010
US Marine Training on Okinawa and Its Global Mission: a Birds-Eye View of Bases From the Air 沖縄海兵隊基地の現実
(Posted on Japan Focus, May 26)
Furutachi Ichiro and Norimatsu Satoko

On May 20, 2010, TV Asahi’s nightly news program “Hodo Station” broadcast a 20-minute special by anchor Furutachi Ichiro on the US Marine Corps bases in Okinawa. The previous day Furutachi and his staff flew around those bases by helicopter, from the south to the north of Okinawa Island, then to Iejima and Torishima, two islands west of the main island. They provide rare bird’s-eye views of the bases, despite restrictions on how close civilian aircraft can fly. This is supplemented by rare footage of Marine training and action from Okinawa and Japan to Vietnam and Iraq. 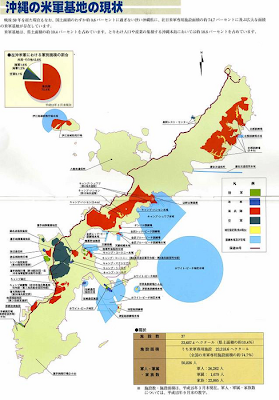 Map of US military bases in Okinawa. Red: Marine Corps; Dark Blue: Air Force (Kadena); Green: Army; Bright Blue: Navy; Light Blue: Water Space and Airspace for Training
About 20% of Okinawa Island is occupied by bases exclusively for U.S. military use, 77% (15 bases and facilities) of which are managed by the Marines. Furutachi flew from Makiminato Service Area (Camp Kinser) just north of Naha, a logistic service base that supplied everything “from toilet paper to missiles” during the Vietnam War, then to Futenma Air Station in Ginowan City and Camp Schwab in the northern city of Nago, the two bases that have been the centre of media attention, with a replacement facility of the former planned to be built near the latter. Furutachi guides viewers beyond the often-reported Cape Henoko, proposed site of the new base jutting into the bay, to the mountainous inland area of Camp Schwab, where Marines conduct jungle training, drawing attention to several rectangular buildings described as ammunition depots. 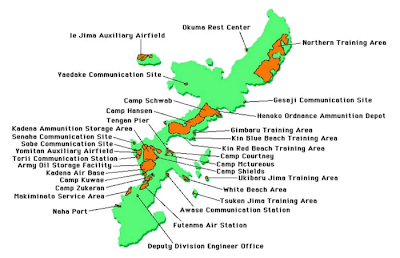 Map from the website of Okinawa Prefecture. Torishima, which is not shown on this map, is about 60 miles west of the Okinawa Island.

Furutachi’s guided tour reminds viewers that Marines are really in Okinawa for training, a global mission that has little to do with “protecting Japan”, as many Japanese have been led to believe by the notion of “deterrence” incessantly cited by politicians. Particularly striking is the scale and nature of the drills conducted within Camp Hansen in central Okinawa, which is ten times the size of Futenma and occupyies more than half of the towns of Kin and Ginoza, and significant portions of Onno and Nago. The camera reveals several “simulated cities” among the thick forests of the base where live-fire training prepares Marines for urban combat. 2,200 troops were dispatched from this base for the attack on Fallujah, Iraq, in November and December, 2004, in which thousands of civilians were killed and the city virtually destroyed. Furutachi discloses that “Three months prior to the Battle of Fallujah, a USMC helicopter crashed into the campus of Okinawa International University adjacent to Futenma Air Station. That helicopter was scheduled to go to Iraq after being joined by battle units of Camp Hansen.”

Camp Gonsalves, the largest of all Okinawa bases, is set in the rich “Yanbaru Forest” of northern Okinawa. Home to the Jungle Warfare Training Center, it is the only US jungle training facility in the world. Furutachi moves onto Camp Kuwae (Camp Lester), where the largest military hospital in the Far East is located, Camp Zukeran (Camp Foster), where spacious suburban-style family houses “built with the ‘sympathy budget’ of Japan” are shown, and then on to Camp Courtney, headquarters of the 3rd Marine Expeditionary Force and 3rd Marine Division. Furutachi points out that “These facilities are command centers of US global wars from Hawaii to the Cape of Good Hope in Africa.”

The last two stops of Furutachi’s helicopter tour are the islands of Iejima and Torishima. Iejima’s Marine air station is used for parachute drop training and take-off and landing training. Torishima serves as an aircraft firing range for both Air Force and Marines. The island, once covered with rich forests, is now completely disfigured. After testing depleted uranium weapons on Torishima in the mid-90’s, the Marines have recently assaulted it with cluster bombs.

The significance of Furutachi’s report is in the detailed visual exposure of the training fields and live-fire ranges that have rarely been subject to scrutiny in Japan, the United States or internationally, in contrast to such visible emblems of the U.S. military presence in Okinawa as air stations and beaches. Furutachi and other commentators were stunned to encounter the reality of simulated battlefields, beyond the dry statistics of bases that comprise “20% of the island”, a figure that the media repeat ad infinitum.

On May 23, Prime Minister Hatoyama announced the government’s plan to build a Marine runway over the Cape of Henoko, betraying his pre-election pledge not to build a Futenma replacement facility within Okinawa, an island already saturated with military bases. Okinawan people have expressed overwhelming opposition to base expansion on the island. Footage like that provided below can not only strengthen the deep Okinawan resistance to expansion of the military base footprint on their island, but also could help to awaken Japanese who have found it easy to look the other way so long as the bases were largely confined to Okinawa. Norimatsu Satoko

Recommended citation: Furutachi Ichiro and Norimatsu Satoko, "US Marine Training on Okinawa and Its Global Mission: a Birds-Eye View of Bases From the Air," The Asia-Pacific Journal, 22-1-10, May 31, 2010.