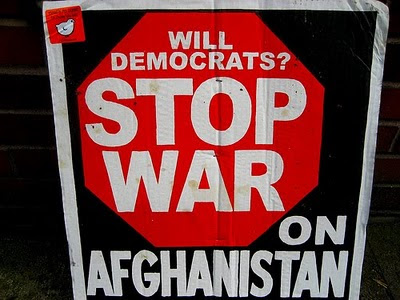 Bruce Gagnon blog
on May 14, 2010
CYNICAL POLITICS OF EMPIRE

The ruling Democratic Party, so afraid of its war in Afghanistan's rising unpopularity with the American people, has chosen to create a war funding supplemental bill that sugar coats the $33 billion more for the Central Asian quagmire in layers of hard to pass up frosting.

The Administration has requested $63 billion in FY2010 supplemental appropriations:

• $33 billion for the Department of Defense (DOD) primarily for deploying 30,000 additional troops to Afghanistan;

• $4.5 billion in war-related foreign aid to Afghanistan, Iraq, and Pakistan;

• $2.8 billion for Haiti reconstruction and foreign aid in the wake of the earthquake;

• $3.4 billion to settle land trust claims of American Indians in the long-standing Cobell case; and

• $1.2 billion to settle the discrimination claims of 70,000 black farmers in the Pigford II case.
Posted by NO Base Stories of Korea at 12:06 AM