Text Fwd: No conclusive evidence yet for “torpedo theory” in Cheonan sinking 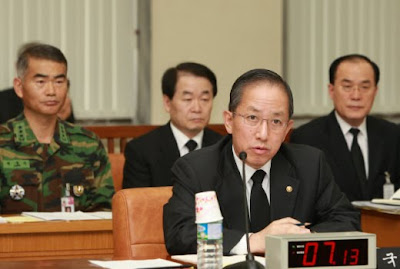 No conclusive evidence yet for “torpedo theory” in Cheonan sinking
:An official report by the military-civillian joint investigation team will be released on May 20
Posted on : May.8,2010 22:08 KST

There have been a series of reports that the military-civilian joint investigation team looking into the cause of the sinking of the Cheonan have found aluminum fragments and gun powder on the funnel and hull of the ship and concluded that the vessel was hit by a torpedo, but the Ministry of Defense adhering to a vague is taking a vague stance, neither confirming nor denying the reports. Moreover, controversy over the cause of the sinking is growing after broadcaster PBC reported Friday that a high-ranking investigation team official denied reports that they had discovered gunpowder and torpedo fragments.

According to high-ranking government officials who requested to remain anonymous, reports are continuing to come out that claim that the gunpowder and metal fragments detected on the Cheonan, comprised of an aluminum-magnesium alloy, are elements that torpedoes are made of, and based on this, the investigation team has virtually concluded that the Cheonan was sunk by a torpedo blast. Chief of Naval Operations Admiral Kim Sung-chan said during a Thursday meeting of navy commanders that the biggest possibility is that the sinking of the Cheonan was clearly a major military provocation by the enemy. Within the military itself, the theory that North Korea torpedoed the Cheonan is firming up as if it were an established fact.

In adhering to a noncommittal stance on these reports, the Defense Minister is virtually standing by and watching the “torpedo theory” spread. A Defense Ministry official said it is perplexing that a series of press reports concluding the cause of the sinking have coming out prior to the investigation team making a final decision, but also said that rather than pick apart each and every report, they planned to make an official announcement on the cause of the sinking by comprehensively taking into account the results of minute analysis. The team plans to announce its finding on around May 20, but it reportedly could advance that date forward a few days.

Meanwhile, a high-ranking official on the investigation team, on the basis of anonymity, agreed to an interview Thursday night with PBC, during which he said neither gunpowder nor torpedo fragments were found. Since the official’s identity would be revealed if the official’s voice had been aired, PBC broadcast the interview Friday morning with the MC reading the questions and the producer answered them as the official had the day before.

PBC reported that the official said the team is in fact searching for gunpowder, but they are not sure of anything about which it would be worth making a meaningful conclusion, and that in what they have investigated so far, no gunpowder has been found. He said the team had concluded that the explosion took place underwater and some distance from the hull, and if this were the case, the gunpowder, too, would have mostly dissipated in the water. He thought this would make collection of gunpowder traces difficult.

He also said they are searching the seabed around the sinking for fragments, but they have found nothing that could be judged to be torpedo fragments. In response to the possibility the Cheonan was sunk by a torpedo, the official said it is still difficult to conclude and that since the physical cause of the sinking would be announced as it is gradually revealed, more cautious consideration and judgment are needed regarding the possibility that it was the result of a North Korean attack.

Please direct questions or comments to [englishhani@hani.co.kr]
© 2006 The Hankyoreh Media Company
Posted by NO Base Stories of Korea at 12:10 AM