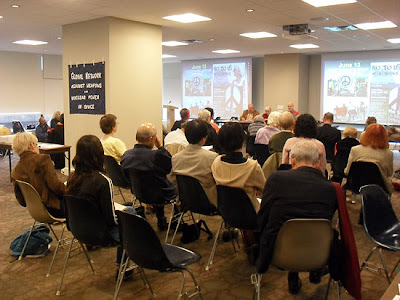 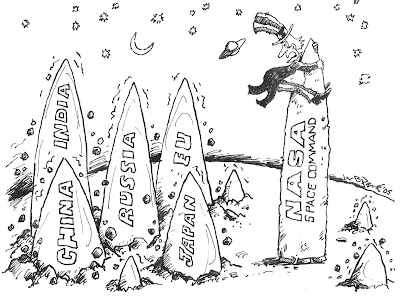 I am at Penn Station in New York City waiting for my train back north. I will get off in Southern Maine and stay the night with Herb Hoffman who will then drive us both to Boston on Tuesday morning for an exciting meeting of key leaders from many progressive movements in the greater Boston area. The idea of the meeting will be to explore how we might build more unified movements during this time of corporate domination of U.S. and global politics.

Right now though I want to post a few notes from the two meetings I attended during this past weekend here in NYC.

On Saturday I went to the Abolition 2000 annual general meeting. Nearly 100 people were there from around the world. These folks are attending the UN''s Nuclear Non-Proliferation Treaty (NPT) meetings that will last nearly the entire month of May.

There are serious questions about what the NPT meetings will come up with. The nuclear powers (led by the U.S.) want to hang onto their nuclear weapons but don't want countries like North Korea or Iran to have them. This brand of double-standard does not create the climate for serious negotiations. At the same time the U.S. is pushing the use of nuclear power for energy production to countries like India who are also building more nuclear weapons - with U.S. help.

During this meeting I was given five minutes to update folks on the work of the Global Network and I made the case that as long as the U.S. is pushing so-called "missile defense," and new Prompt Global Strike weapons, then countries like Russia and China (and others) are not likely to be willing to dramatically reduce their nuclear forces.

The Abolition 2000 (A2000) network is very diverse with many different agendas and strategies represented. But fundamentally everyone wants to get rid of nuclear weapons. My observation though is that despite their great work to bring about nuclear disarmament, many A2000 groups are so fixed on their deep concern about nukes that they are not able to recognize the wider forces that are having direct impact on their hopes for abolition. Without these key linkages - to "missile offense" and new space technologies - then their work will be severely hampered.

One issue that came up (and one that I need to write more about here) is the competition between Russia and the U.S. (and its NATO allies) over control of the Arctic region as global warming makes it possible to explore that region for oil. A call was made at the A2000 meeting for a nuclear-free Arctic campaign.

On Sunday we had the annual membership meeting of the Global Network at the Church Center which is just across the street from the U.N. About 50 people attended throughout the day.

We spent considerable time talking about the theme for our 2010 Keep Space for Peace Week (October 2-9). Last year's theme (and poster) was on the use of drones and people felt it was a great success in communicating the links between Unmanned Aerial Vehicles (UAV's) and the larger space technology issue. We came up with a good list of possible ideas for the 2010 theme that included:

• Prompt Global Strike systems (to give the U.S. the ability to hit targets on the other side of the world in first-strike attack in less than one hour.)

• Prevention of an Arms Race in Outer Space (PAROS) Treaty at the U.N.

• Alternatives to endless war (conversion of the military industrial complex) and creation of green jobs by cutting military spending.

This was a great brainstorming session and the list above is all important and timely. It was ultimately decided that we would center our space week theme around the first item of U.S. "missile offense" deployments to surround Russia and China. The other items will be extensively featured in our next newsletter and in on-going work of the Global Network.

We had a partial showing of the new documentary film Pax Americana and the Weaponization of Space. You can see the film's web site here. The filmmaker, Denis Delestrac, came from Barcelona, Spain to be with us for the meeting and answered the many questions about the film and the distribution plan.

Pax Americana is now showing throughout Europe (already seen by 3 million people) and Canada. But sadly Delestrac has yet to be able to get the film into any film festivals in the U.S. (even though it won Best Documentary award at a festival in Vancouver) nor has he been able to find a U.S. theatre distribution deal.

We talked extensively about using the film during our October 2-9 Keep Space for Peace Week and Delestrac promised to find a way to have it available for us in DVD form by then. His problem is that it cost him one million dollars to make this fine film and he must first try to recoup some of those funds through theatrical showings. People loved the film (they wanted to see the whole thing but time did not allow it) and they loved Delestrac as well.

Other important items for discussion at the meeting included:


• U.S. efforts to draw India into the space warfare program as a way to further encircle China.

• Pentagon efforts to expand the use of 'cyber warfare" to gain space domination and control.

• Beginning to talk about a "moratorium" on science as they are now out of control and the people of the world cannot keep up with new technological developments in areas like nano-technology and robotics.

• U.S. militarization of the Asian-Pacific region, particularly the deployments of "missile offense" in South Korea and Japan and expansion of U.S. bases in that region.

• Obama's recent announcement of Mars missions that will use nuclear power. (Journalist Karl Grossman was at the meeting and reminded us that NASA is also calling for nuclear power to be used in "near Earth commercial missions.")

The Global Network will hold its 18th annual space organizing conference in Nagpur, India on October 9-12. Many of our key leaders will be attending as we recognize the urgency to expand organizing on the Indian continent if we hope to stop the U.S. effort to spread a new space arms race to that part of the world. Please let us know if you are interested in joining with us in India.

* You may want to see the below as well. 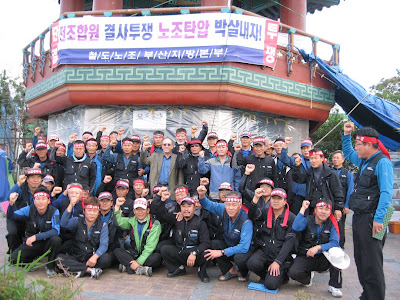 Posing with striking tugboat workers in Busan, South Korea last year
Posted by NO Base Stories of Korea at 1:50 AM