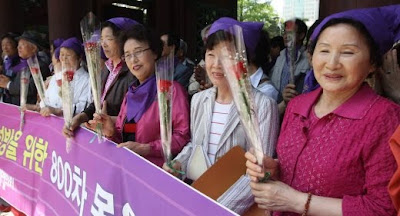 Members of MINKAHYUP, a civic organization for the families of prisoners of conscience, hold their 800th Thursday demonstration at Tapgol Park in Seoul, May 20. The Thursday demonstration was initiated by MINKAHYUP to urge the government to repeal the National Security Law in 1993.
They have stated that about 70 prisoners of conscience are still incarcerated in South Korean prisons.'
Posted by NO Base Stories of Korea at 8:35 AM