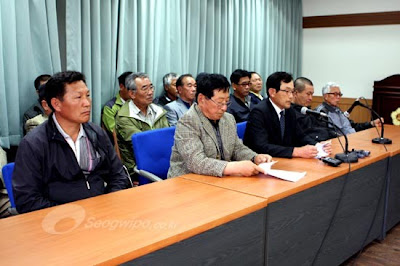 The remarks by Hyun Myung Kwan, the preliminary candidate of ruling Grand National party, for the Jeju Island governor, who said on May 4, that “The Gangjeong village was decided as the planned naval base construction area through the’ villagers’ vote’ has been making ripple in the Jeju society. It provoked the Gangjeong villagers who has long time demanded the villagers’ vote as their issue because the Island authority has never sincerely acknowledged villagers own vote in which the opposition votes against the naval base was more than 94%.

The Gangjeong villagers, having the press interview in the citizens’ room, Jeju Special Self-Governing Province Council, at 11:30am, on May 6, strongly refuted against his words, saying it was an ‘absurd remarks’.

Here are some parts of the villagers’ ‘Press Release on the Denouncement on the absurd remarks of the Candidate, Hyun Myung-Gwan.”

“The remarks by Hyun Myung-Gwan, the preliminary candidate, that the bringing about the naval base in the Gangjeong village had been by the legal procedure was mocking the Jeju Island people. If it had been the proper procedure, there would have not been many Gangjeong villagers’ bloody-tear struggles for years. Also one should remember there has been the movement of recalling Kim Tae-Hwan, the Island governor, for his unilateral self-righteousness and inability and one cannot but deplore the fact that the Candidate who cannot clearly recognize the fact many Jeju Island people have been clearly noticing is the candidate for the Island governor, of the ruling party.”

“The thing that we have consistently claimed for three years was to decide on practicing the ‘villagers’ vote,’ but the candidate Hyun is saying [the decision] was by the villagers’ vote.”

“Also candidate Hyun is limiting the issue of Gangjeong to the issue of compensation,’ but it is the remark that does not grasping what is the practical matter. If he sees the Gangjeong villagers’ conflict as the issue of simple compensation, his consciousness level is that of the no more than the tradesman who sees only the matter of interest and loss.”

“To see his more ridiculous behavior to change his words that it was not the ‘villagers’ vote’ but the ‘opinion collection’ after his remarks became the controversy.”

“[With] the fact that the Samsung C& T in which he is the advisor has joined in the naval base construction , one can not find any bit of his heart loving Jeju in his attitude of not saying any words in the current important issue of the Jeju Island for which he is the candidate. It is the shame of the Jeju island people that Hyun Myung-Gwan, the axis of immorality with the Samsung slush fund is the candidate of the ruling party.”

“In 2006, Kim Tae-Hwan, the Island governor was elected with the gap of the 4469 votes over the candidate Hyun. One should remember that the Gangjeong villagers have gotten more than 30,000 claimants at the time of the villagers’ recall movement of Kim in 2009.”

“If he does not do any clear expression of his position, the Gangjeong villagers will do all opposition movement including the movement of his defeat in the election. The Jeju Island people are not foolish as to select twice the leader who does not have the Island people in the center of his heart.”

After the press interview, the Gangjeong villagers visited the candidate Hyun in his office for the election affairs. After talking with Hyun, the infuriated villagers upon his sneaking and absurd remarks, expressed the fury against him.

The Gangjeong villagers saying him, that “Since you have not lived in the Jeju Island, you don’t know the naval base issue very well. If you have lived in the Jeju, you could not say such remarks,” demanded his apology statement in all the newspapers. 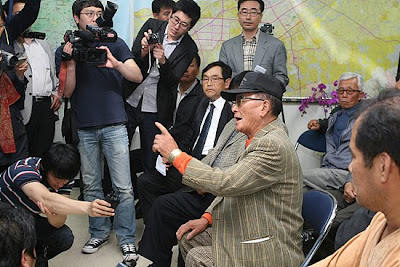 “I have clearly said that Hwasoon (the first candidate area) was the right place for the naval base.(Was he intending to divide the Island people?) But despite that, the site was decided to Gangjeong and I feel so sorry about it but I hope you understand it and follow the national policy. If I hurt you with my mistake, I apologize for it. But If I become the governor, I will do for the national interest (Yes. He is the Samsung tradesman rather than military who will use the term, 'national security,' above all) my best to ask the national consideration for you, as we see in the case of the Pyeongteak US base, to the President and the central government so that I could console your wounds.”

He also repeated his former words that the naval base would be the civilian-military complex beauty harbor for tour, in which the military use will be subsidiary and the base would bring the big economic development to the village. 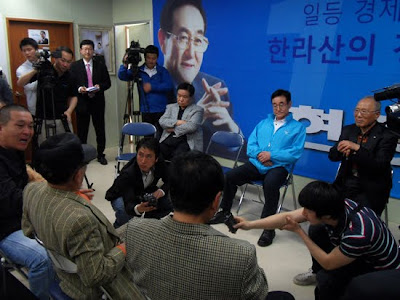 However, the villagers who have experienced all the navy and government’s lie were infuriated by his remarks and expressed their anger against him.

One elder man in the village by saying, “Due to the naval base issue, all my eight children have been torn one another. I fell so resentful in my deep heart,” expressing his frustration of how the naval base issue has brought the conflicts even among families, scolded the candidate that he should not lie any more.

The candidate, embarrassed by the degree of the fury of the villagers, finally left the place by hurrying.

The villagers will have another meeting in days and discuss the measure against him and struggle. 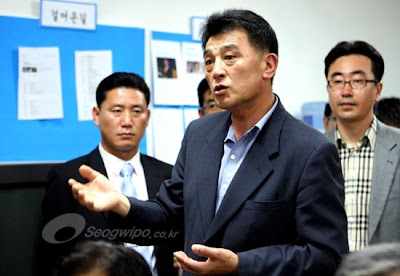 * Image source: Seogwipo Daily News Paper
Gangjeong mayor, Kang Dong Kyun is speaking against the candidate Hyun not with his words representing the official remarks as the mayor but as one of the villager. His official mention as the mayor, against the naval base plan will be blocked until June 2 election day, as the vicious election law that prohibits the official political remarks by the government officers or para-government officers and that has passed through by the congress under the Lee Myung Bak government since it launched in 2009.

Posted by NO Base Stories of Korea at 8:34 AM