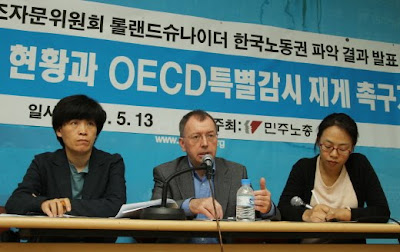 'Roland Schneider, senior policy advisor at the Trade Union Advisory Committee (TUAC) of the Organisation for Economic Co-operation and Development (OECD), speaks during a press conference at the office of the Korean Confederation of Trade Unions (KCTU) in Seoul’s Yeouido, May 13.'

Hankyoreh
OECD official says S.Korean government is excessively interfering in labor-management relations
:The official says the Lee Myung-bak administration’s limit on wage payments to full-time unionists does not conform to international standards.
Posted on : May.14,2010 12:31 KST


Roland Schneider, senior policy advisor of the Trade Union Advisory Committee (TUAC) to the Organisation for Economic Co-operation and Development (OECD), held a press conference Thursday at the office of the Korean Confederation of Trade Unions in Seoul’s Yeouido on labor relations in South Korea. Schneider stated that the limit on wage payments to full-time unionists, which has been generating controversy in Korea, does not conform to international standards.

In addition, Schneider also said that the South Korean government is interfering excessively with labor-management relations and noted that the time off system in South Korea was introduced to weaken unions. He commented that the international standard is for the issue of full-time unionists to be left to independent discussions between labor and management.

Furthermore, Schneider also said that the time off limit in South Korea is vastly shorter than in other countries. He noted that while the German automaker Volkswagen has around 100 thousand workers, it also has 52 active full-time unionists. With the time off limit to be announced Friday by the Labor Ministry, a workplace with more than 15 thousand union members is restricted to 18 full-time unionists as of July 2012, regardless of company size.

In Germany, he pointed out, the employer must provide all expenses for the union office, communications equipment and union representative education. He commented that the South Korean system gives rise to unfair labor-management relations because it forces the workers rather than the employers to bear all expenses for union activity.

In order for the South Korean government to broaden the scope of its activity on the international stage, he said it must reform labor-management relations and labor law to conform to the international standard. He warned that if labor rights continue being downgraded, it might become difficult for discussions or ratification to take place for additional free trade agreements.

Schneider traveled to South Korea on Monday to conduct an investigation so that he will be able to serve as a union advisor when the OECD makes a decision in the near future on whether to include South Korea in its special monitoring in the areas of labor law and labor-management relations.

Schneider said that he plans to report the deteriorating situation in South Korean basic labor rights to the OECD’s Employment, Labour and Social Affairs Committee on May 17 and urge the committee to seriously examine the matter.

Please direct questions or comments to [englishhani@hani.co.kr]
Posted by NO Base Stories of Korea at 12:13 AM