Text Fwd: CATCHING UP ON [THE RECENT SPACE NEWS] 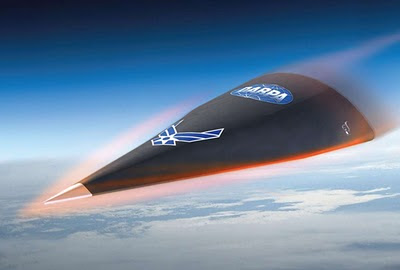 * Image source: same as the below link
'The first test flight of the Falcon Hypersonic Technology Vehicle (HTV)-2 failed '

* Just back from New York City yesterday afternoon with much to catch up on. Feeling a bit groggy. Might be a second cup of tea morning. The sun is shining and the temperature outside more to my liking - cool. A beautiful Maine day. Our guest Rao has gone for a walk to the local library. Housemate Karen will take him for a ride out to the ocean today while I try to get my backlog of work done.

* Space News reports, "The U.S. Defense Department’s first test flight of a new hypersonic glider ended abruptly as communications with the vehicle ceased mid-flight, a setback in the Pentagon’s pursuit of a highly precise long-range strike weapon. The Defense Advanced Research Project Agency (DARPA)’s Falcon Hypersonic Technology Vehicle (HTV)-2 program is one of three designs in the running to serve as the basis for the Conventional Prompt Global Strike weapon the Pentagon wants to build in order to hit a target anywhere in the world within an hour with a non-nuclear munition. The first of three planned HTV-2 flight tests took place April 22."

"The administration of U.S. President Barack Obama has made clear its intention to maintain the nation’s strategic deterrent while reducing its dependence on nuclear weapons. As such, the New START nuclear arms reduction agreement signed with Russia on April 8 will not constrain any current or planned conventionally-armed ballistic missiles, according to an April 8 fact sheet posted on the U.S. State Department’s website."

The cost of this week's HTV test and a follow-on in 2011, together is $308 million. Your tax dollars in action enriching the aerospace industry and likely ensuring a new, expensive, arms race in space as Russia and China (who clearly understand they will be the targets) feel they must respond.

* I got an interesting email the other day about Obama's effort to privatize NASA and "civilian" space operations.

The article, by Steve Zeltzer, reports, "A full bore campaign is now being waged by the Obama administration to shutdown the U.S. unionized space program and turn it over to 'new age' speculators who want to build a new space program in a 'regulation free zone' in Florida. A key player in this plan is billionaire and former owner of Paypal, Elon Musk."

Musk, has set up SpaceX (Space Exploration Technologies Corporation) which appears to be on the way to running a taxi service for American astronauts. This is just another step toward eventual turning "ownership" of the planetary bodies over to corporations who envision making untold riches from mining the sky in years to come. You, the taxpayers, have paid the technology start-up costs and now the corporate elite will stand to make zillions in profits and pay little back in taxes.
You can see the full article here
* Yonhap News reports, "South Korea's first Aegis destroyer will undergo a comprehensive evaluation of its fighting capabilities near Hawaii in June, a Navy source said Monday.

"The source said Sejong the Great will conduct tests while taking part in the multinational Rim of the Pacific (RIMPAC) naval exercise. Lockheed Martin -- the developer of the Aegis system -- and U.S. Navy experts will act as observers and evaluate the weapons systems during the trial."
This is an indication that the South Korean Navy is now being fully integrated into the command structure of the U.S. Navy and that the Aegis destroyers that would be deployed at the proposed base on Jeju Island will in fact be a part of the larger U.S. military strategy of surrounding China's coastal region in order to create the ability to choke off their importation of oil via ship.
See the recent New York Times article on China's fear and response here.
* I head back to NYC on May 7 for a couple more international meetings including the Global Network annual meeting on May 9.
Posted by NO Base Stories of Korea at 2:59 PM