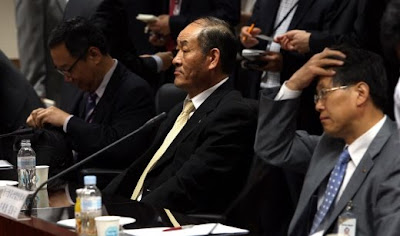 Hankyoreh
Cut trade causes crisis for businesses in S.Korea Following an indefinite trade cut with N.Korea without a grace period, the government has not proposed any compensation to assist the hundreds of businesses affected
Posted on : May.26,2010 12:18 KST

CEOs companies engaged in trade and economic cooperation with North Korea attend a briefing session on inter-Korean relations at the Central Government Complex in Seoul, May 25.

“I do not know if these sanctions are targeting North Korea or South Korean businesses. They are strangling the small and medium-sized companies.”

Businesses commissioned for inter-Korean processing and trade were up in arms Tuesday following President Lee Myung-bak’s announcement of plans to halt inter-Korean trade in response to the sinking of the Cheonan. The companies charged that the government’s measures “are killing South Korean businesses, not North Korea.” With the government’s focus lying solely on punishing North Korea, the abrupt announcement gave no time for small and mid-sized companies to prepare a retreat, and despite what is effectively a compulsory measure, almost no government compensation plan has been put in place.

Following a Unification Ministry-led talk Tuesday with 14 representives in areas related to trade and economic cooperation with North Korea, presided over Vice Minister Um Jong-sik, the Unification Ministry announced that it had opened a “counseling center” to get a better grasp on the damages and difficulties suffered by businesses in the wake of the suspension.

However, it was also confirmed that on Monday, the ministry had already given notification to the Korea Customs Service in Incheon not to clear any products being brought in from North Korea. As a result, observers are predicting that finished products from processing companies that were scheduled to enter Incheon Harbor on Thursday via vessels affiliated with Kookyang Shipping will not be able to go through customs procedures.

“On the 24th, they issued the measure forbidding customs passage, so what is the point of having a talk with businesses on the 25th?” asked an official at a garment company commissioned for processing and trade. “It is nothing more than a show.”

Inter-Korean companies were faced with severe woes after the government blocked trade without giving any grace period.

“For the most part, the companies commissioned to do processing plan their production six to seven months in advance, so a lot of the raw materials are already in North Korea,” said an official who attended the Unification Ministry’s talk Tuesday. “If the goods that are currently being produced, or even those that are already finished, cannot go in, then it tarnishes the image not only of the businesses, but also of the company, since they are unable to deliver to the foreign contracting company, and of the state.”

Moving a production base to another country is not an easy matter for companies.

“How can you make a profit when you have to give two dollars in China for the things you process for one dollar in North Korea?” asked the president of a processing business who said he has worked with North Korea for twenty years. “The businesses that looked only to North Korea will have to shut down.”

“We cannot move our production base to China or Vietnam, since the supply plan has already been set,” said the president of another commissioned processing business. “In the end, the small businesses will collapse if they cannot take orders.”

Moreover, in the case of garment toll processing, companies have recently entered the time of year for producing fall and winter items that account for 70 percent of yearly sales. The blow is expected to be even greater for these businesses if they are unable to receive orders.

Despite all of this, the government has yet to produce any effective measures for addressing the damages to the hundreds of small and medium-sized companies involved in inter-Korean economic cooperation.

“We have paid all our taxes to the government in our trade with North Korea, so if the government has blocked us from doing business, it needs to provide due compensation,” said the president of a business engaging in toll processing in Pyongyang. “That is our right.”

Following the outcry from companies, the Unification Ministry appeared to take a step back on Tuesday. “In the interest of minimizing damages to our businesses without compromising the government’s measures against North Korea, we have decided to examine the importation of finished processed goods for North Korea on a case by case basis,” the ministry said.

With importation of North Korean farming, forestry and marine products also prohibited, analysts are predicting an inevitable rise in the price of these items due to supply difficulties. North Korean products account for a full 66.2 percent of total short-necked clam imports, as well as 35.1 percent and 21.2 percent of bracken and garlic, respectively.

Hankyoreh
Financial markets unstable in S.Korea following Cheonan sinking : Analysts predict continuing market instability since three issues affecting the market cannot be solved in the short-term
Posted on : May.26,2010 12:33 KST
Posted by NO Base Stories of Korea at 11:11 PM