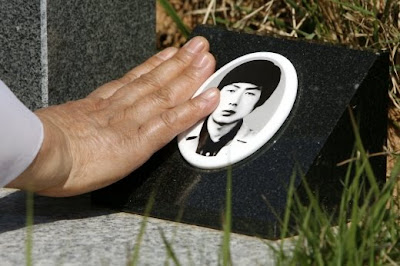 Hankyoreh
Hand of the bereaved mother
Posted on : May.18,2010 12:28 KST
'Mrs. Gu Sun-ak places her hand upon the picture of her deceased son carved into his tombstone during the 30th anniversary of the May 18 Democracy Movement at the May 18 National Cemetery in Gwangju, May 17.

Mrs. Gu’s son, then just 22 years old, was killed during the bloody clash between the authoritarian government’s military troops and protesters at the South Jeolla Provincial Government building in Gwangju in May of 1980.'
Posted by NO Base Stories of Korea at 8:48 PM