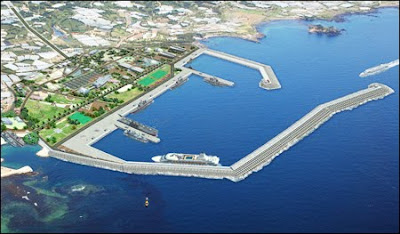 * Image source: Korean Sentry Forum
'The prospective outlook of a strategic naval base to be constructed on the southern resort island of Jeju over the next five years. / Courtesy of Navy'

According to the Jeju media such as the Seogwipo newspaper, Sisa Jeju and Media Jeju, on July 13, 2010, the new Jeju Special self-Governing Province government and the Jeju Special Self-Governing Provincial Council (* Island Assembly) had the meeting on July 12 to solve the conflict surrounding the naval base issue and agreed with each other to hold the policy consultation meeting on it.

In the media, the new Island governor, Woo Geun-Min was told to say that, “There has been the general agreement among the Island people that ‘the settlement of the conflict on the naval base issue,' should be the priority settlement task for the new Island government,” and to express his opinion that “I think that the reasons of the problems were due to the communication cut or absence, unilateral administrative drive and opaque opinion delivery.”

The Memorandum of Understanding (MOU) has been concluded by the Lee Sang-Hee, Minister of National Defense, at the time, Jung Jong-Hwan, Minister of the Land, Transportation and Maritime Affairs and Kim Tae-Hwan, former Jeju Island governor, on April 27, 2009. See the article at the time. You can see the Korean version of MOU here(MOU 국문). It has caused the great fury by the Gangjeong villagers and Jeju Island people for its undemocratic & opaque procedure, eventually bringing up the Island people’s recalling movement of Kim Tae-Hwan, the former governor (which was failed for the vicious voting law). 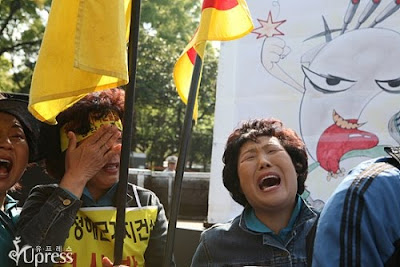 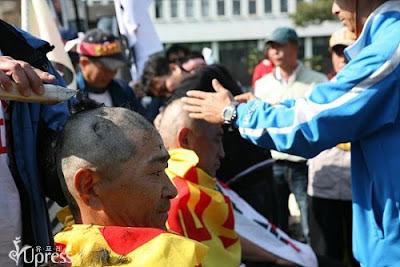 * Image source: Same as above
'16 villagers shaved their heads in protest against the MOU conclusion by the Ministry of National Defense and the Jeju Island government. It provoked many villagers' tears at the time.' 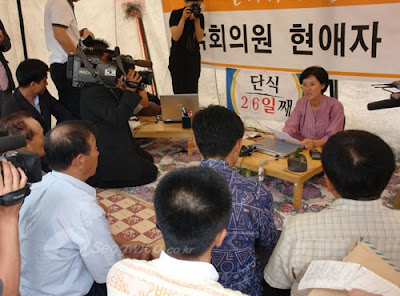 * Image source: Seogwipo Daily newspaper, July 7, 2010
'Hyun Ae-Ja, former National Assembly woman, on her twenty-sixth day of the hunger strike' in July, 2007. After her hunger strike, the Pan-Island committee against the military base has been set up.

However, the new Island governor who does not basically oppose the naval base plan, but only considers the budget and procedure issues, will not be good at it. Unless the solidarity by all the Island and main land people happens, and unless the Island assembly that has been occupied by the opposition parties more than half in last June 2 election and that wants to reconsider the plan, shows a clear vision, the prospect would not be so rosy.

It is becoming clear that the Jeju naval base, constructed by the blood-tax of Koreans would be the forefront for the U.S. against China (Click here and here.) and will only benefit the arms industry (Click here)

Now, it is time to gather the wisdom and will from all the concerned people.
Posted by NO Base Stories of Korea at 10:17 PM