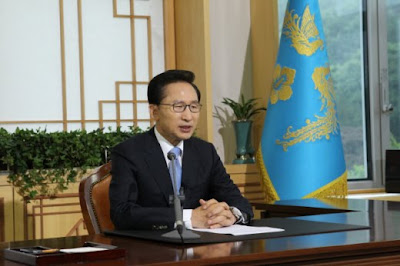 President Lee Myung-bak said Monday that his decision to delay transferring the wartime operational control (OPCON) of South Korean troops from the U.S. was inevitable in light of regional and global security concerns.

President Lee stated that the North Atlantic Treaty Organization (NATO), which is controlled by a U.S. commander, is a basic framework for the security of Europe with a number of strong countries.

“Our OPCON issue should be also understood from the perspective of East Asian and global security,” Lee said in his 43rd radio address.

“Some criticize the adjustment of the timing of the OPCON transfer, citing the right to self-defense,” Lee said. “However, it was a substantial and sovereign choice based on South Korea’s needs.”

Lee’s explanation over the NATO‘s wartime operational control, however, was incorrect.

To begin, South Korea’s OPCON is completely entrusted to the U.S. Forces Korea (USFK) commander, but NATO’s decision to deploy troops is determined by unanimous agreement of the members that may also exercise their right to veto. That is, an invaded NATO member’s wartime operational control is not automatically entrusted to the NATO commander.

Furthermore, members of NATO can regain their operational control according to their own judgment.

Additionally, USFK commanders have control over all South Korean troops except for Special Forces. The NATO commander, however, has command over just 10 percent of the troops. Thus, NATO members may wield operational control over 90 percent of their troops, even during a wartime situation.

Posted by NO Base Stories of Korea at 9:50 PM