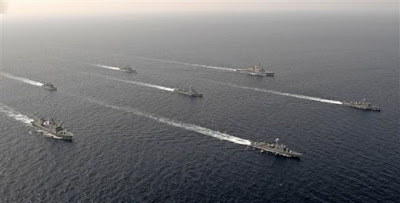 Hankyoreh
Joint naval exercises may be relocated
:The Ministry of National Defense appears to have bowed to pressure from China, which expressed opposition the exercises taking place in the West Sea
Posted on : Jul.14,2010 12:18 KST
Kwon Hyeok-cheol

The Ministry of National Defense announced Tuesday that it would take at least a week to finalize a decision over the South Korean-U.S. joint naval exercises planned in response to the Cheonan sinking, and that the location of the training would be considered in a flexible way without restricting it to the West Sea.

“Up until last week, there had been talk between South Korea and the U.S. that the plan for the exercises would be decided around Monday or Tuesday of this week, but it seems that it will take at least a week,” said Defense Ministry spokesman Won Tae-jae during a briefing Tuesday. “The timeline, scale, and methods of the exercises have not yet been decided.”

Won also said, “Since there are various national defense, foreign affairs, and national security-related matters scheduled for July, these will be taken into account in pursuing the exercises.”

One military official said there was a strong chance the joint South Korea-U.S. naval exercises would begin after the South Korea-U.S. foreign and defense ministers’ meeting scheduled to take place in Seoul on July 21.

The official said, “Holding the joint naval exercises within July is justifiable, since an August schedule would overlap with the joint South Korea-U.S. Ulchi Freedom Guardian exercise.”

Won Tae-jae also issued statements in regards to the site of the exercises.

“We do not think it is important that the exercises be carried out in specific waters, since their primary goal is to demonstrate South Korea and the U.S.’s defense preparedness in the wake of the Cheonan incident,” said Won. “Since a number of factors must be taken into account in deciding the time, scale, and place, including the national security environment of the Korean Peninsula, South Korea-U.S. dialogue, and military effects, we need to be flexibly accommodating in regards to the training site.”

In other words, the ministry will not insist on holding the exercises in the West Sea, which has been a sensitive issue for China.

On May 24, the Ministry of National Defense announced that it would be carrying out joint South Korea-U.S. exercises in the West Sea, the site of the Cheonan’s sinking, as a show of force directed at North Korea.


Korea Times
US aircraft carrier may join exercise in East Sea
July 13, 2010
Posted by NO Base Stories of Korea at 11:12 PM