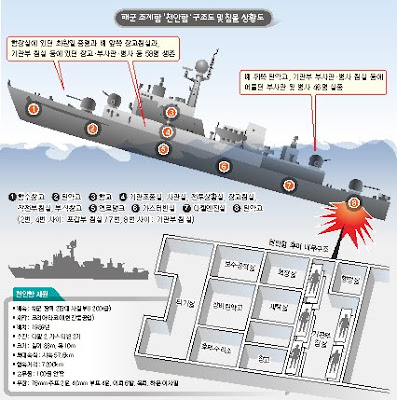 * Image source: Hankyoreh, March 29, 2010
'The illustration shows the layout and probable chain of events of Patrol Combat Corvette (PCC) Cheonan.
Most of the officers in the officers quarters located in the front of the PCC were rescued, while many sailors in the sailors quarters in the stern of the PCC are among those who are missing. From the left, 1. warehouse 2. powder magazine 3. bridge of the ship 4. combat intelligence center 5. fuel tank 6. gas turbine room 7. diesel engine room 8. powder magazine and sleeping quarters
(located between numbers 2 and 4, and between numbers 7 and 8)' 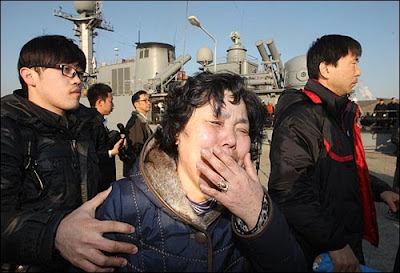 "While the search for the missing 46 Korean sailors continues (as families of the missing eagerly wait for the search results), the mystery over the sinking of South Korean naval ship Choenan [on March 26, 2010] is intensifying. No definitive cause of the sinking has been identified. The South Korean government initially downplayed any possible North Korea's involvement, but now suggests a possibility of North Korean mine, or a mine left over from the Korean War. This is unlikely as the location of the sinking took place south of a South Korean island that is near the disputed sea border with North Korea. And it is more unlikely that Korean War-era mine could have created a blast severe enough to break the large 1200-ton Choenan in half.
* CFC Commander General Walter Sharp said Sunday that just as Cheong Wa Dae announced, the U.S. military did not detect any unusual movements from the North Korean military, viewing the possibility that the incident was caused by a North Korean provocation as low.
(Hankyoreh, March 29, 2010)

Some observers are asking why Choenan, a large ship, was sailing in the part of the West Sea (Yellow Sea) where the water is shallow and currents are rapid. Usually, small and fast boats patrol this area. Could this have been a result of an accident during a military exercise in the area? The South Korean government has not been forthcoming with definitive information on the incident, further fueling doubts and uncertainties. Because this incident took place near the disputed sea border with North Korea, it highlights the dangers of unresolved issues of the Korean War, which is still technically not over (due to the lack of formal peace treaty ending it)."

A U.S. Navy group of four ships ― three warships and one salvage vessel ― have joined South Korea's rescue and recovery operations for its sunken frigate, the Cheonan.

Their presence has made the latest operation the biggest of its kind.

A total of 22 salvage ships, destroyers and cruisers from the two allies are participating.

Helicopters conducted searches over the presumed scene of the sinking, marked by buoys.

Navy and civilian divers plunged into near-freezing water in a desperate effort to search for survivors, whose chances of survival are growing slim.

Kim Yong-kyu, spokesman for the U.S. Forces in Korea (USFK), provided information on the U.S. Navy's participation in operation.

The spokesman said its participation was made at the request of South Korean authorities.

The four U.S. ships belong to the U.S. 7th Fleet, based just south of Tokyo.

"They were participating in Key Resolve/Foal Eagle Exercise, a joint Korea-U.S. military drill which will continue until the end of April," the spokesman added.

Among the four is the 3,200-ton rescue-and-salvage ship USS Salvor that carries 16 skilled divers and equipment that makes it possible for divers to reach sunken ships under extreme conditions. Rapid currents and poor underwater visibility have blocked Korean navy divers from locating the split hull of the warship or finding any missing sailors.

Scores of ROK Navy ships have already been dispatched to the scene.

"All available warships and support vessels from the 2nd Fleet in Pyeongtaek are participating in the search-and-rescue operations," Cmdr. Bae Myeong-woo said.

The 86-meter-long Gwangyang is specialized for recovering sunken ships. It is equipped with deep-sea diving equipment to reach 91 meters deep, a crane and lifting bags.

The minesweepers are used in detecting sea mines or ship wreckage with the help of sonar equipment.
A Navy's Landing Ship, Tank (LST) transport vessel is also participating.

Later in the day, the 14,000-ton Dokdo Landing Platform Helicopter (LPH 6111), the largest helicopter transporter in Asia, arrived at the site.

The 199-meter-long large-deck landing ship, commissioned in 2007, not only serves as a light aircraft carrier but also is used in international peacekeeping and disaster relief.

The police personnel excused that the military has also known their presence inside the buildings.

What was the need of spy for the families of the missing soldiers? What are the truths that the police, military and government want to hide?
Posted by NO Base Stories of Korea at 9:58 PM