* For other helpful articles and references, see the below (English/ Japanese).

[Why is the news of a plan to move 7,000 US Marine troops from southern Okinawa to Guam creating no good vibes in Okinawa? Because nothing much is changing. The Japanese Government is proceeding with construction of a new US Marine Corps Air Station in Nago, to ‘replace’ the old Futenma base. Throughout the last decade, locals have resolutely fought the US military presence. Period. However, Tokyo and Washington have basically ridden roughshod over locals’ democratic expression of opposition, including, the outcome of the 1997 Nago citizens’ referendum against the relocation of Futenma to Henoko and, since April 2004, residents’ non-violent blockade action to prevent the government’s preliminary site investigations and ocean floor drilling.

In October 2005, Japan and the US reached agreement on plans to construct a military airport in Henoko, shifting the runway location from the shallow reef area slightly to the north and extending the runway from 1,500 to 1,800 m. [1] The new site, located within the US military facility and extended into the deeper Oura Bay, would effectively prevent entry by local protesters.

Okinawan researchers have recently uncovered documentary evidence refuting the claim that ‘Henoko is a Futenma substitute’: the plans call for a newly built upgraded military base using taxpayers’ money despite strong local opposition. The US military claims to be protecting global democracy. Respecting local democracy would be a good start . Miyume Tanji]

It was just after sunrise when the boats appeared off the shore of Henoko on 19 April 2004. The boats belonged to the Security Facilities Bureau, Naha Branch, and they were there to conduct a geological survey. The Bureau planned to drill 63 holes under water. This action, which ignored necessary review and public notification procedures, blatantly violated Article 31 of Japan’s Environmental Impact Assessment Law. [2] The Henoko locals responded to this illegal action with a sit-in. They then canoed and swam out to the ocean in scuba gear and physically blocked the investigation by climbing the Bureau’s scaffolds. The protest spread nation-wide, attracting donations and participants to the round-the-clock direct action in Henoko as well as prompting sit-ins at the Diet in Tokyo. The boats for the blockade were provided by supporters, with local fisherpeople taking part. The Henoko locals’ non-violent action gained public support; so did their steely determination, not just to protest, but to stop, the government’s illegal site investigations. The sit-in and blockade continued until September 2, 2005, when the Bureau removed the scaffolds from the ocean, citing concern about typhoon damage. The protesters’ blockade had succeeded.

Meanwhile, Tokyo-Washington meetings for the comprehensive U.S. forces realignment had started. The new sea-based military base in Henoko was part of this realignment. ‘Tell the US that Okinawa will not accept any new base construction’, requested Yamauchi Tokushin and three other delegates from the Okinawan Citizens’ Conference against Futenma Relocation within Okinawa at a meeting with Defense Policy Chief and Director General of the Foreign Ministry’s North American Affairs Bureau. It was cold but, the diplomat, wiping sweat from the nape of his neck, said ‘we realize this must be hard for Okinawans’. From such comments, the delegates discerned that the Japanese government had not conveyed Okinawans’ collective will to the US, and was promoting relocation of Futenma to Henoko. On 29 October, a formal agreement was reached between Japan and US at the Joint Security Committee (referred to as the ‘two plus two meeting’). [3]

Strangely, the government of Japan calls this agreement an Interim Report, although nowhere in the document is it so referred to. I sense deceit in this government’s expression. The report is really meant to be the final agreement, yet it is not clearly presented as such.

New Plan of Futenma relocation to Henoko: a US-Japanese ‘Collaboration’, not a ‘Compromise’ At the preliminary two-plus-two meeting on October 24, 2005, the media reported, Japan argued against the US - taking an uncharacteristically bold position on the best location for the new base in Henoko. Japan allegedly ‘resisted’ the original ‘reef plan’ preferred by the US. This involved construction of a military airport on Cape Henoko, which is a shallow reef area and the habitat of rich marine life including dugongs. The reclamation of this reef has been fiercely opposed by environmentalists. Finally at the end of the meeting that dragged until early on the 26 th,, Japan ‘compromised’. The US and Japan agreed on a ‘coastal plan’, which involves construction of a runway covering an L-shaped area extending from the Henoko reef to Oura Bay, embracing Camp Schwab (see Figure 1). [4] However, Figure 1 indicates that the agreed construction method, far from being a compromise reached after long negotiation, was a collaborative scheme by the two governments to upgrade the capacity of the Futenma Marine Corps Air Station.

It is not just a military airport that the US forces want in Henoko. As specified in the relevant Department of Defense Executive Report issued on September 27 th, [5] US forces demanded a special facility called ‘CALA’, or the Combat Aircraft Loading Area within the new base to load ammunition and explosives on aircraft (see Figure 2). The document stipulates, furthermore, that ‘CALA’ needs to be at least 1,250 feet away from any occupied buildings. Currently only Kadena Air Base can meet these conditions and Futenma helicopters are flying to Kadena for loading purposes. The 1997 Executive Report requires a ‘CALA’ to be built next to the new sea-based Air Station because Kadena is too far away. It seems that the reason why the runway of the new Air Station was extended from 1,500 to 1,800 meters at the October two-plus-two meeting was to facilitate a special loading zone. 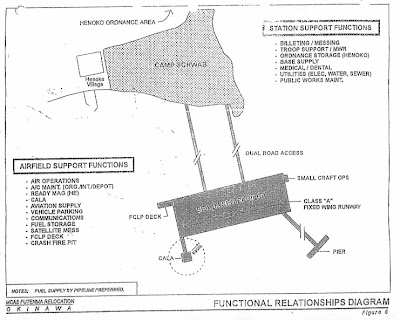 According to the 1997 Executive Report, the direction of the new runway was decided following research conducted in 1966. In December 1966, in a ‘Master Plan of Navy Facilities on Okinawa, Ryukyu Islands’, [6] the US Navy recommended construction of a 3,000-meter airfield on reclaimed Henoko coral reef to be used by the marines. In addition, it also designed a military port in adjacent Oura Bay (Figure 3) for Navy use. The location of the airfield’s runway in Figure 3 is almost identical to that in the 1997 Executive Report (Figure 2). Figure 3 also depicts a ‘pier’. This pier appears to be simply a variation of the military port proposed in the 1966 Master Plan. In sum, the US wants not just a runway, but also a loading facility and a military port. At the 2005 two-plus-two meeting, the two governments agreed on the construction of ‘a pier for refueling and relevant facilities’, that is, nothing less than a military port: Oura Bay is more than 20 meters deep, enough for a nuclear aircraft carrier to enter alongside the pier. 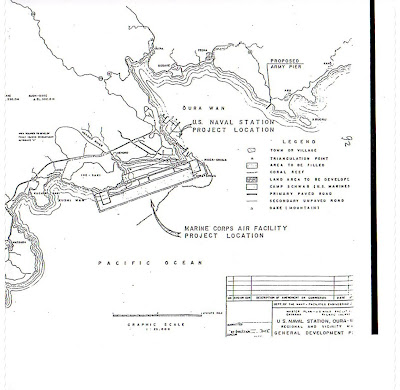 There are further issues. In the area targeted for the new military airport in the October Agreement, there are historical ruins, the local newspaper Okinawa Taimusu reported. The astonishing thing is that the 1997 Executive Report acknowledged the cultural ruins on the south side of the area as one of the factors militating against airfield development. In short, the Department of Defense in 1997 judged that the ruins in the coastal area posed potential difficulties for the new military base construction. However, the Agreement in October 2005 designated the whole southern coastal area as the future site for the airfield replacing Futenma, despite the US forces’ understanding that the area was problematic. So, why is it OK now? Perhaps the Japanese government promised to legalize the construction by enacting a new law, such as a Special Measures Law for the Protection of Cultural Properties, that makes an exception for the needs of US forces. [7] With the 2005 ‘coastal plan’, the US and Japan are attempting a ‘hat trick’: an Agreement on the construction of a military airport, a special loading zone, and a military port – three new facilities – in Henoko. The construction, far from being a compromise, is the joint work of the two states. The plan is clearly unacceptable. Nago citizens have already rejected the new base construction in the referendum on December 21 1997 even without knowing all that the plan entailed.

Respect the democratic will of local citizens. Stop the Henoko military airport construction plan. This is precisely what the US military has long sought. Blocking the plan is a step toward protecting democracy worldwide.

Makishi Yoshikazu is a Naha born Okinawan architect. Since working for Okinawa SÅ gÅ Jimukyoku (Okinawa Development Agency), he has designed award-winning buildings for Okinawa Christian Junior College, Sakima Museum and many others. He has also been a long-term environmentalist and peace activist in Okinawa. [8]

Translated by Miyume TANJI from a chapter in Makishi’s Okinawa wa Kichi o Kyozetsu Suru (Okinawa Refuses Bases). Tanji’s book Myth, Protest and Struggle in Okinawa will be published by RoutledgeCurzon in 2006

[2] According to the Law, any environmental impact assessment activities can be started only after the publication of a document that explains the methods of such activities reviewed by the Ministry of Environment and relevant ministries/agencies (Article 31).

[7] In December 2005, the government discussed special legislation to deprive local governments of authority over public water reclamation projects precisely in order to restrict the power of Okinawan Governor Inamine, who is opposed to the new ‘coastal plan’. Similar special legislation (related to US Military Special Measures Law) was passed in April 1997, which removed local government’s power to authorize lease of privately owned land occupied by the US military facilities, when a landowner refused to consent.