* Below is the arbitrary translation of the linked article.

Upon the Visit by the Prime Minister Jung to the Jeju City, the Gap Between the People Welcoming and Not –Welcoming Him Appeared:

Gangjeong Villagers, through ‘Relay One Man Protest,’ Delivered Their Position of “ Death-Defiantly No Naval Base.” 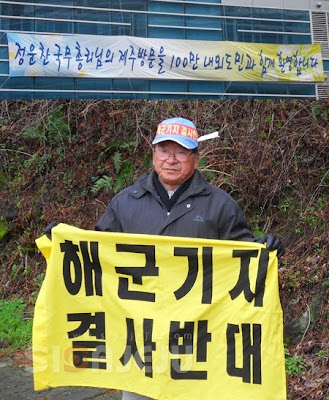 The banner welcoming for the Prime Minister's visit, being held in the [outer wall] of the Science Park
and the banner of "Death-Defiantly No Naval Base" held by a villager contrast each other.

While the prime minister visited Jeju on March 25 to join the ceremony for completion of the Jeju Science Park( *advanced science techno complex by the direct translation from Korean), Gangjeong villagers, moving to the city of Jeju, had the rally to deliver their position of ‘no naval base’ to the Prime Minister, Jung Woon-Chan. 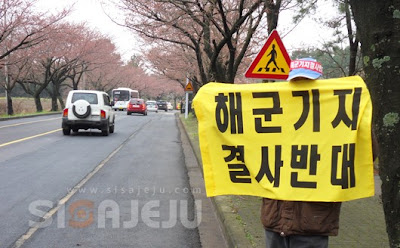 The Gangjeong villagers delivered their will to oppose the naval base on the road to the Science Park.

Upon it, 50 Gangjeong villagers, holding a small banner of “We death-defiantly oppose the naval base, ” expressed their will of protest standing in a line on the road where the Prime Minister Jung and the government personnel entered into.

During the process, about one at least to 4~5 policemen were deployed for a villager and because of it, there happened some conflicts between the policemen and villagers. 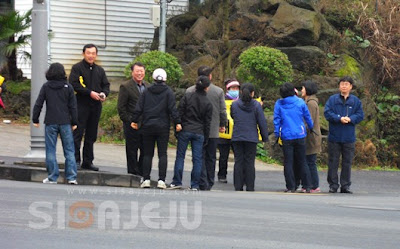 The police confront the Gangjeong villagers on the road.

A villager saying, “One man protest does not need the notification,” reputed, “ Each one of us is standing by 50meter interval one another. If we stand like this with this distance, every villager’ s protest can be seen as one man protest therefore there is no problem with our action.”

Another Gangjeong villager saying, “Even though it is not our business to say this and that about his visit for the ceremony [for the Science Park], as I know, there have been no cases that the Prime Minister came for the issue of the naval base,” expressed that, “Because the Prime Minister has never visited Gangjeong, that is why we, ourselves, came from Gangjeong [*which is about one hour distance from Jeju by car], and deliver our opinion.” 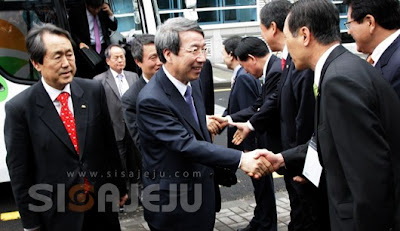 Prime Minister, Jung Woon-Chan was welcomed by the personnel related to the ceremony for the Science Park.

The Prime Minister who arrived among the Gangjeong villagers’ welcome (?), sharing greetings with many related personnel of the ceremony, moved to the ceremony site and got the hot welcome from them. Pyeon Jung-Il, the Advisory chairman of the Jeju Free International City Development Center, through the celebration speech of the ceremony, repeated mentioning of the name of the Prime Minister Jung and delivered his expression of thanks to and welcome of him.

Otherwise, at 3pm, afternoon on the same day, there was the final pleading(8th) for the lawsuit on the cancellation of the disposal on the approval of the Jeju naval base realization plan, that the Gangjeong villagers have appealed against the Minister of National Defense.

Posted by NO Base Stories of Korea at 8:22 PM