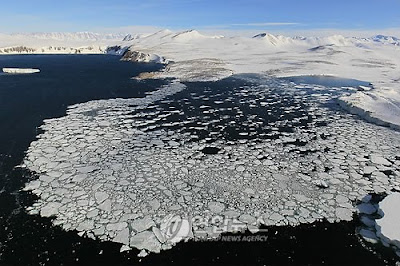 * same as the link below

SEOUL, March 17 (Yonhap) -- South Korea said Wednesday that it has selected a site for a second research station in the Antarctic, paving the way for the nation's intensifying drive to conduct scientific research in the frozen continent.

The selection is based on analysis of data collected by South Korea's first icebreaker Araon during its recently-ended three-month exploration around the region.

"Based on the results of thorough analysis and opinion gathering from government and private-sector experts, we have decided to build our second research base in Terra Nova Bay located near the Ross Sea on the southeastern tip of the Antarctic," the Ministry of Land, Transport and Maritime Affairs said in a press release.

The region was chosen over the once strong candidate site of Cape Burks as it has easier accessibility and greater operational convenience, as well as being better positioned for global cooperation with research bases run by other countries, it noted.

The research base will be built on a floor size of 3,300 square meters, located 74 degrees south latitude and 164 degrees east longitude. More than 100 billion won (US$88.3 million) is expected to be spent on its construction.

The ministry said that it will submit related documents detailing its construction plan in mid-March to the Antarctic Treaty Consultative Meeting, which groups international observers and experts and provides guidelines on the management of the region. Construction of the base is expected to be completed in April 2014.

The selection comes more than two decades after South Korea opened its first Antarctic research base, joining other nations in securing a better footing in the continent deemed to hold an abundant amount of natural resources and a key to the global issue of climate change.

South Korea has been running the King Sejong Base, located on King George Island near the northern part of the continent, since 1988.

Currently, 20 countries are running or are in the process of building 39 bases in the South Pole, while only eight of them including the United States run more than two research bases there.

"We expect the construction of the second base to help us emerge as a global powerhouse in researching the polar regions," the ministry said.

"It will also help us conduct more diverse basic research that has not been easily done in the past, such as research on the upper atmosphere, glaciers, meteorites, the continent and continental shelf," it added.

The second base will consist of five buildings which could accommodate up to 60 people. All the facilities will be built using eco-friendly materials and moved to the South Pole after being assembled here in South Korea, the ministry explained.

The government will start a bidding process within this year to pick a builder to spearhead the construction. The first phase of construction will start in 2013 after all necessary preparations including design are complete, it added.