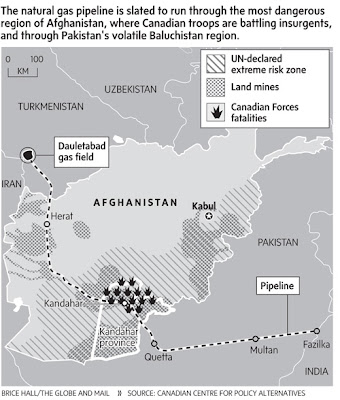 I've had lots of responses to my post the other day about the Marines being used to clear out southwest Afghanistan. One friend here in Maine sent me the above map that was in a Canadian newspaper in 2008. This map lays out a similar pipeline route from Turkmenistan that would deliver natural gas through Afghanistan, Pakistan, and then into India.

Here are a few tidbits from it:

"Afghanistan and three of its neighbouring countries have agreed to build a $7.6-billion (U.S.) pipeline that would deliver natural gas from Turkmenistan to energy-starved Pakistan and India – a project running right through the volatile Kandahar province – raising questions about what role Canadian Forces may play in defending the project.

"To prepare for proposed construction in 2010, the Afghan government has reportedly given assurances it will clear the route of land mines, and make the path free of Taliban influence.

"The so-called Turkmenistan-Afghanistan-Pakistan-India [TAPI] pipeline has strong support from Washington because the U.S. government is eager to block a competing pipeline that would bring gas to Pakistan and India from Iran.

"Afghanistan's national government could reap $160-million (U.S.) a year in transit fees, an amount equivalent to half the government's current revenue.

"The pipeline proposal goes back to the 1990s, when the Taliban government held talks with California-based Unocal Corp. – and its U.S. government backer – while considering a competing bid by Argentina's Bridas Corp. Those U.S.-Taliban talks broke down in August, 2001. India, which desperately needs natural gas imports to fuel its growth, later joined the revived project."

So the picture gets clearer still. It is likely that the plan in the end would call for parallel pipelines carrying oil and natural gas from the Caspian Sea region - one turning east into Pakistan and then India and the second continuing south into Pakistan and ending at ports along the Arabian Sea.

But everyone acknowledges now that the "success" of these proposals is conditioned on stabilizing Afghanistan - what the U.S. and Canadian governments call dealing with "security concerns."

One of the chief concerns of the U.S. and their NATO allies is certainly making sure that Iran does not succeed in their efforts to have the pipelines run through their country. So in a sense the U.S.-NATO war on Iran has already begun.
Posted by NO Base Stories of Korea at 8:05 AM