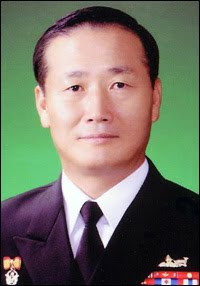 * Image source: same as the below link
'Kim Sung-chan'

Vice Chief of Naval Operations Adm. Kim Sung-chan has been designated to head the Navy, a spokesman announced Monday.

The appointment is subject to approval by the Cabinet, a meeting of which, presided over by President Lee Myung-bak, is slated for Tuesday.

Kim, if approved, will replace Adm. Jung Ok-keun and be sworn in to serve for two years.

Kim, 56, is known to be an expert on policy, strategy and operations as he has served at key posts of the Ministry of National Defense and the Navy headquarters.

He served as chief policymaker and official in charge of arms improvement at the Navy headquarters, and commander of the Navy's First Fleet. He was born in Jinhae, South Gyeongsang Province.