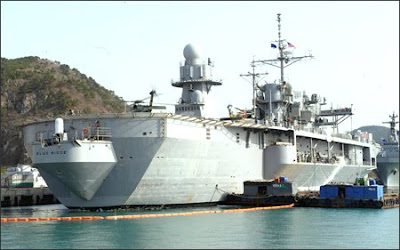 'USS Blue Ridge in joint drill: The USS Blue Ridge, flagship of the U.S. Seventh Fleet, is anchored at the Naval Base Command in Busan, Wednesday. The amphibious command ship, commissioned in 1970, is participating in the annual ROK-U.S. military exercises Key Resolve/Foal Eagle, which are aimed at evaluating the allied forces’ capability to defend South Korea from outside attack. The 10-day military drills end today. The 18,500-ton ship is capable of accommodating more than 1,000 crew members.