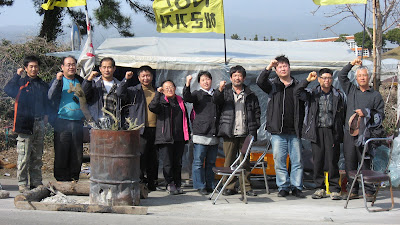 Image source: Gangjeong, Jeju Island
(The image was sent from the cartoonist Kho who lives in Gangjeong village, on March 13)

Six workers who belong to the Pan-Korean Industrial & Regional General Labor Union Association visited the Gangjeong village and took the photo with the villagers and activists there, to encourage the villagers who have protested against the naval base for more than three years. According to Kho, the workers expressed their will of solidarity and wish of keeping in touch, with the villagers.

Posted by NO Base Stories of Korea at 7:06 PM