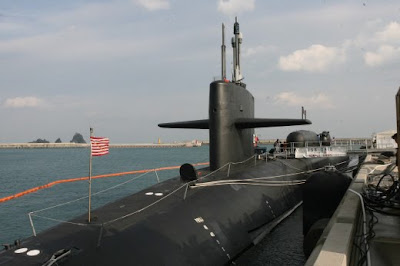 'The U.S. nuclear-powered submarine, docked at the Busan port to join the ROK-US combined drill, is opened to the media on February 2008.'


Hankyoreh
S.Korea-U.S anti-submarine drill conducted night of Cheonan sinking
: This confirmation by USFK is expected to reignite controversy over the cause of the Cheonan’s sinking
June 8, 2010

United States Forces Korea (USFK) officially confirmed Sunday that 20 minutes prior to the sinking of the Cheonan, South Korea and the U.S. had conducted an anti-submarine drill some 139 kilometers away in which a South Korean submarine played the role of a target. This marked the first time since the sinking that U.S. officials have concretely discussed what specifically goes on during joint South Korea-U.S. drills.

Quoting U.S. military officials, the Associated Press (AP) reported Saturday (local time) that prior to the sinking of the Cheonan, two US destroyers and other ships practiced tracking while a South Korean submarine played the role of enemy.

In response, USFK spokeswoman Army Col. Jane Crichton confirmed that the drill began at 10 p.m. on March 25 and ended at 9 p.m. on March 26 due to the blast aboard the Cheonan. The AP reported Western experts stated there are still questions about what happened that day near Baengnyeong Island. In particular, one official who asked to remain anonymous, since he was not authorized to discuss the issue, said the sinking of the Cheonan “may not have been an intentional attack at all, but the act of a rogue commander, an accident or an exercise gone wrong.”

The AP stated that the anti-submarine drill was part of the Foal Eagle exercise, which began in mid-March following the Key Resolve exercise, a computer simulation that ran for 11 days from early March. Foal Eagle includes live fire from U.S. Marines, air attacks, urban warfare and anti-submarine training.

“From 2 p.m. to 9 p.m. on March 26, a drill to block North Korean special operations units from infiltrating by sea was conducted, and until 5 p.m., this included an anti-submarine drill,” said Defense Ministry spokesman Won Tae-je during a regular briefing Monday. “After 9 p.m., the drill was over and the units were on orders to conduct night-time patrols.”

Won also said that since the drill was conducted 170 kilometers from the site of the Cheonan sinking, it had nothing to do with incident. As for why the location point of the drill differed in the South Korean and US explanations, a military expert said the difference could be because mobile maritime drills on the sea take place over dozens of kilometers.
Posted by NO Base Stories of Korea at 5:15 PM