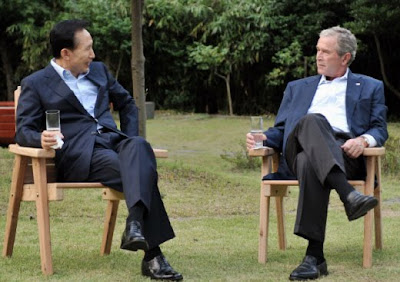 A controversy is raging in the South Korea’s Protestant Christian sector over a “Prayer Meeting for Peace” to mark the 60th anniversary of the Korean War, with former U.S. President George W. Bush as a special guest.

The prayer meeting is scheduled to take place Tuesday at the World Cup Stadium in Seoul’s Sangam neighborhood and will mainly have conservative Protestant figures in attendance. Bush is to give a testimony on the topic of “freedom,” while Rev. David Yonggi Cho of the Yoido Full Gospel Church and Rev. Billy Kim of Suwon Central Baptist Church plan to appear as speakers.

Bush accepted an invitation to attend from Rev. Billy Kim during his visit to Jeju Island last year to attend the 2009 summer forum held by the Federation of Korean Industries. In a prospectus, the prayer meeting’s preparatory committee stated, “Our hearts sink to see people relaxing their guard against North Korea, which has weapons of mass destruction pointed at us, members of the same people, and approaching it only with a sense of love among fellow Koreans.”

In response, thirty-seven Protestant groups, including the Christian Alliance for Church Reform, Bible Korea, and Christian Ethics Movement, held a press conference Monday at the United Christian Center on Seoul’s Jongno 5-ga Road, where they urged a cancellation of Bush’s attendance and the holding of a gathering purely for praying for the true peace of the Korean Peninsula. Protestant figures attending the press conference include former Unification Minister Lim Dong-won and former National Institute of Korean History President Lee Man-yeol.

“They have revealed the limitations of their historical understanding by sending a message of peace praying for reunification between North Korea and South Korea by inviting former President Bush,” said figures attending the conference. “Former President Bush is the man responsible for causing the Iraq and Afghanistan, leading to countless deaths and injuries, and pouring fuel on the cold war fire and on the Korean Peninsula throughout his term by adhering to a policy of hostility toward North Korea with no exit.”

The figures at the press conference also said, “If it is a peace prayer meeting, they should strongly encourage the governments of both North Korea and South Korea to lay down their senseless weapons.”

# See the Statement, 'Bush: guest speaker at prayer for peace meeting in Korea?' by 17 Christian Peace Organizations HERE.
Posted by NO Base Stories of Korea at 9:29 PM