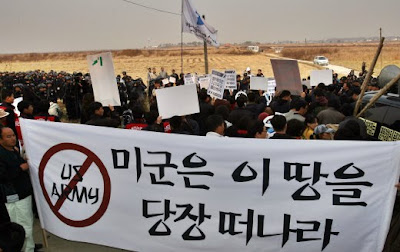 'Residents of Pyeongtaek City, Gyeonggi Province members of civic organizations hold a banner that states, “The U.S. Army should leave immediately,” during a demonstration, November 2007. The demonstration was held to voice opposition to the plan to relocate the U.S. Forces Korea (USFK) Yongsan Garrison in Seoul to Pyeongtaek.'

The Cheong Wa Dae under President Lee Myung-bak and the Ministry of National Defense have repeatedly stated that South Korea will not be bearing any additional burden if the schedule for the transfer of wartime operational control (OPCON) is postponed until Dec. 1, 2015. Many observers, however, have been saying that the country has found itself at a great disadvantage in discussions on the expenses of relocating U.S. military bases to Pyeongtaek City.

The Cheong Wa Dae (the presidential office in South Korea or Blue House) cited the completion of the United States Forces Korea (USFK) base relocation to Pyeongtaek in 2012 as one of the reasons for postponing the date of the transfer of wartime operational control three years and seven months past the agreed-upon date of April 17, 2012. Both South Korea and the United States agree on the relocation of the Yongsan Garrison to Pyeongtaek, scheduled to take place around 2015. Discussions, however, have remained difficult as South Korea has called for the relocation of the U.S. Second Infantry Division headquarters in Uijeongbu to Pyeongtaek in 2015 and the U.S. has called for relocation in 2016.

The reason for the stalemate in relocation discussions is the difference in opinions on the two countries’ share of the expenses for the move. According to a project management firm’s December 2008 comprehensive facilities plan, the relocation of the Yongsan garrison is set for completion in late 2014, and the U.S. Second Infantry Division headquarters in 2016. For several years, however, South Korea and the United States have been unable to agree upon their shares of the construction costs.

During the discussions, the United States argued that completing the Pyeongtaek base construction by 2015 would require a budget of $600 million per year, and that it would have to extend the construction period because it was only able to secure $300 million. This applied indirect pressure upon South Korea to pay additional expenses if it wanted to finish the relocation by 2015.

Military officials and experts predict a greater likelihood that the United States will use the Cheong Wa Dae’s policy of completing the Pyeongtaek relocation by 2015 as a means to transfer relocation expenses to South Korea during the discussion process. There is also a chance it will call for additional amendments not in the existing agreement, such as lodging for family members accompanying the U.S. forces.

Also noteworthy was the fact that on June 16, ten days before the announcement of the agreement to postpone the transfer of wartime operational control, U.S. Secretary of Defense Robert Gates announced that he would be cutting the U.S. defense budget by around $100 billion over the next five years due to the fiscal deficit. The War on Terror has caused the U.S. defense budget to balloon from $316 billion in 2001 to $693 in 2010.

“The relocation of the Yongsan Garrison and U.S. Second Infantry Division headquarters has nothing whatsoever to do with the wartime operational command transfer issue, and has been delayed due to issues such as the construction plans,” said Deputy Defense Minister Jang Kwang-il.

The Ministry of Defense has not given any official explanation to date on the specific date of the relocation or the scale of expenses shared between South Korea and the United States. It has cited as a reason for the lack of explanation the fact that discussions have remained “under way” on the USFK relocation since beginning in 2008.

“The Lee Myung-bak government and conservative newspapers have claimed that wartime operational control has nothing to do with military sovereignty, but this is a falsehood. They have stated that wartime operational control is exercised in accordance with agreed upon guidelines from the South Korean and U.S. presidents within the framework of the Security Consultative Meeting (SCM) and Military Commission (MC). This, however, is merely a formality. It is self-evident that the commander of Combined Forces Command (CFC), who is also the commander of the U.S. Forces Korea (USFK), will follow the directions of the U.S. president in an emergency. It is a reality that OPLAN 5027, which is a plan of action for a full-scale war on the Korean Peninsula, is being planned by United States Pacific Command (USPACOM). The fact that the United States would push a security response in an emergency on the Korean Peninsula in accordance with their own strategic judgment is also a source of instability resulting from the deferment of military sovereignty.”

“In particular, it is necessary to make public the entirety of the negotiating process and what was discussed, if only to reduce suspicions of a political exchange through major South Korea-U.S. Free Trade Agreement (KORUS FTA) concessions. The Lee administration has merely stated that Kim Tae-hyo, presidential secretary for national security strategy, began discussing a delay in the transfer of wartime operational control in early February. Despite the fact that the United States likely requested something in return from South Korea when the country first requested the delay in wartime operational control transfer, there has been no explanation. There has also been no explanation about the progress of the KORUS FTA negotiations.”
Posted by NO Base Stories of Korea at 3:51 PM