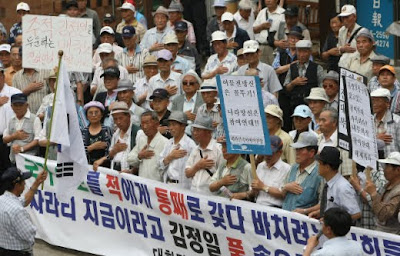 'Members of far-right organizations hold a protest to voice opposition to the People’s Solidarity for Participatory Democracy (PSPD) in front of the PSPD headquarters, June 18.'

Hankyoreh
Scholars call for end to PSPD witch-hunt :The group of scholars have called for a transparent debate about the sinking of the Cheonan
Jun.22,2010

A group of professors and other intellectuals have begun to voice demands that conservative groups stop their witch-hunt of the People’s Solidarity for Participatory Democracy (PSPD) in regards to the sinking of the Cheonan.

In a statement released Monday, about 200 professors with the National Association of Professors for Democratic Society said the PSPD had performed its innate duty and right as a civic group, and called for conservative groups to end their irrational and backward attacks on PSPD.

The professors stressed that South Korean society needs not “blame and attacks,” but a transparent debate on the sinking of the Cheonan. They said that knowing, as the Board of Audit and Inspection (BAI) pointed out, that there were serious problems with the military reports themselves, suspicions about the investigation results could only grow, and stressed that if a full-scale debate and investigation regarding the Cheonan did not take place, the attacks on PSPD would be regarded as a maneuver to cover up the truth.

They also said that branding PSPD an “enemy group” is a mistaken claim that corresponds to false charges and slander, and that if there is a group the prosecutors should investigate, it is not PSPD, but the extremist right-wing groups that have designated PSPD as an enemy group.

The Asian Forum for Human Rights and Development, composed of 46 groups in Asia including PSPD, send an urgent petition to Frank La Rue, UN Special Rapporteur on the Promotion and Protection of the Right to Freedom of Opinion and Expression, calling on the UN to strongly advise the South Korean government to end a prosecutorial investigation of PSPD.

Meanwhile, it was reported on Monday that as the government and conservative groups launched their concerted attack on PSPD, the group gained about 1,000 new members.

In the week between June 14 and 20, the PSPD gained 1,003 new members, accounting for some 10 percent of the group’s total membership (10,500). In particular, between June 15 and 17, when the verbal assaults and threats of rightist groups, who brought gas canisters and bottles of paint thinner, grew violent, the group set new records with over 200 members joining each day. The previous record for most new members in a single day was 42, set during the candlelight vigil demonstrations of 2008.

: [Cheonan Warship Report 1]
The PSPD's Stance on the Final Investigation Report on the Cheonan and the countering measures of the Lee Myung-bak administration'

: [Cheonan Warship Report3]
Six Problems on the Investigation Process of the Cheonan Sinking