The BP PR machine seems to be in high gear. There are suspicions they are working to enforce a media blackout on photographs of wildlife death and destruction.

Today 31% of the Gulf of Mexico is off limits to any fishing. There is a lot of ocean people cannot access. What people may not be seeing is the massive death and destruction being inflicted on the gulf's marine life, birds and wildlife so I want to thank all of you for passing on this modest post so others may know. 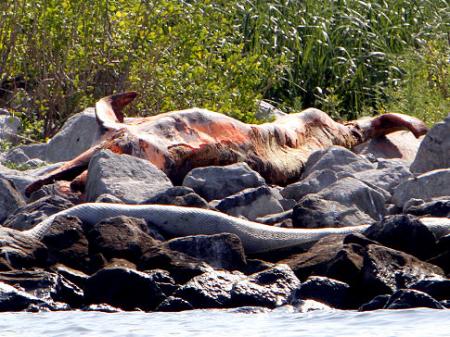 Decomposing dolphin on rocks at Queen Bess Island in Gulf of Mexico.

The US Fish and Wildlife Service and the National Oceanic and Atmospheric Administration and the Deepwater Horizon Unified Command issue a daily tally of the animals collected in oil-impacted regions of Alabama, Florida, Louisiana, Mississippi, and Texas. Those statistics include dead and alive numbers. As of today June 2, there are 604 dead birds, 253 dead sea turtles, and 29 mammals (including dolphins). Today's June 3 tally could be found here.

The statistics are very misleading because they only log animals and marine life that washes up to the shores. Dead birds and dolphins who sink to the bottom of the ocean are obviously not reported.

Five of the world's seven sea turtle species are found in the Gulf of Mexico: leatherback, hawksbill, green, loggerhead and Kemp's ridley. Each of the five sea turtle species of the Gulf is now classified as either threatened or endangered and could become extinct unless steps are taken to protect and enhance its populations.

Also gravely impacted are dolphins. Known to play around boats, many Atlantic bottle nose dolphins are drowning in oil as they follow skimmer boats cleaning up the oil slicks. Other endangered species living in the gulf include the sperm whale, and birds such as the piping plover and the gulf sturgeon.

National Wildlife Federation senior scientist Dr. Doug Inkley explains, these numbers tell only part of the story: "The deaths of dolphins and sea turtles are particularly tragic, because we know we are only seeing the tip of the iceberg with those that have been washed up onshore and tested."

Mother Jones magazine has reported that there is an active cover-up by BP instructing their contractors not to show dead animals to the media. New York Daily News reporters Matthew Lysiak and Helen Kennedy reported that interviews were conducted with BP contractors. The contractors took the Daily News to locations where dolphin carcasses were dead and rotting. The contractor interviewed said, "When we found this dolphin it was filled with oil. Oil was just pouring out of it. It was the saddest darn thing to look at." 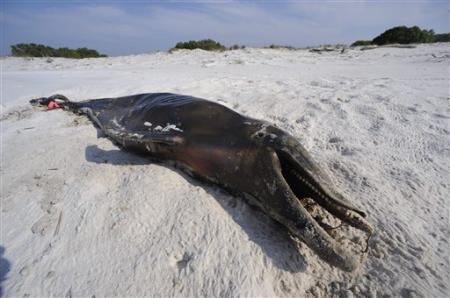 A dolphin lies on dead on a beach on Horn Island,Miss., in the Gulf of Mexico, Tuesday, May 11, 2010. Officials say that at least six dead dolphins have been found on the Gulf Coast since May 2. Authorities don't know whether the animals died from the Oil in the Gulf.

The interviewed contractor continues, "There is a lot of cover-up for BP. They specifically informed us that they don't want these pictures of the dead animals. They know the ocean will wipe away most of the evidence. It's important to me that people know the truth about what's going on here. The things I've seen... They just aren't right. All the life out here is just full of oil. I'm going to show you what BP never showed the President." Maybe tomorrow on the President's third trip to the gulf, he might get to see dead dolphins and turtles in addition to oil slicks. 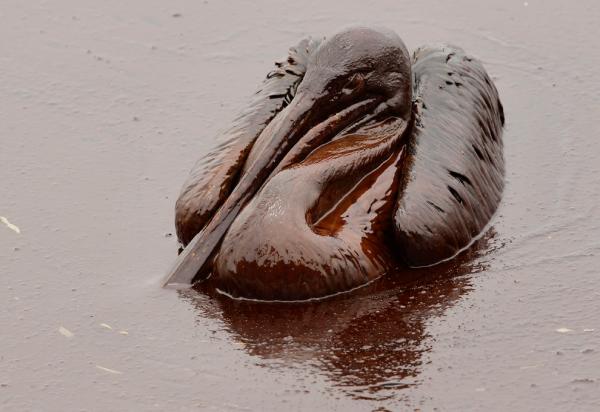 A few pictures are coming out. As of June 4, the Unified Command has not released pictures of injured or dead animals. This photo was taken by AP photographer: Charlie Riedel

The Unified Command released a statement that says: Neither BP nor the U.S. Coast Guard, who are responding to the spill, have any rules in place that would prohibit media access to impacted areas and we were disappointed to hear of this incident. In fact, media has been actively embedded and allowed to cover response efforts since this response began, with more than 400 embeds aboard boats and aircraft to date. Just today 16 members of the press observed clean-up operations on a vessel out of Venice, La. The only time anyone would be asked to move from an area would be if there were safety concerns, or they were interfering with response operations.

The statement does not match the contract BP requires to be signed before people (and/or their boats/vessels) are accepted as clean-up contractors. The Unified Command should check Article 22 of the BP contracts before issuing their press releases. The contracts were uncovered by a group called Powering A Nation. 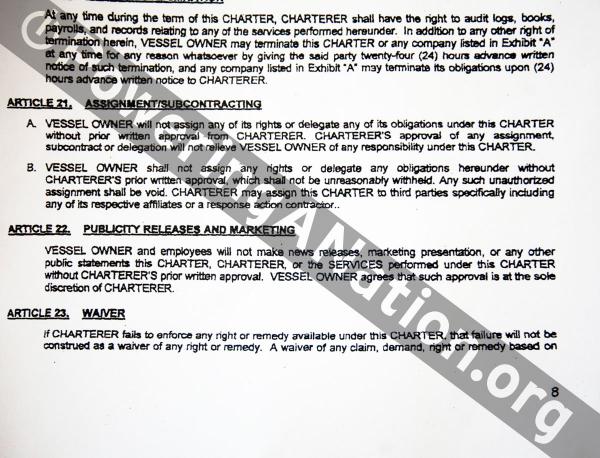 Here is BP's binding agreement that people have to sign to be qualified as contractors. Note Article 22. If that does not read as a media restriction, I don't know what does.

BP is certainly not without their defenders. Geoff Pender and Karen Nelson of the McClatchy Newspapers wrote that Governor Haley Barbour said:

After Barbour visited Petit Bois Island yesterday and saw that the oil that came ashore had "been washed away by storms," he returned to the positive spin, saying, "I don't think the island was hurt one iota." Barbour even downplayed concerns about animals being suffocated by the oil in the ocean, comparing it to humans being covered in toothpaste.

Mississippi Department of Environmental Quality Director Trudy Fisher said samples of what was apparently the same oil slick, taken when it was farther south of the barrier islands, were "nontoxic." Fisher said water and weather had helped all the volatile chemicals in the oil evaporate. Barbour described the oil as "weathered, emulsified, caramel-colored mousse, like the food mousse." "Once it gets to this stage, it's not poisonous," Barbour said. "But if a small animal got coated enough with it, it could smother it. But if you got enough toothpaste on you, you couldn't breathe." Barbour said he spoke with a member of President Barack Obamaâ€™s staff on Air Force One while he was on the island, after telling the administration in an early morning conference call that oil had come ashore in Mississippi.

I called the Unified Command's wildlife line at 985-902-5231 and asked them to comment on the NY Daily News report of apparent instructions by BP personnel to their contractors not to show dead wildlife and marine life to the media. The person I talked to would not even give his name and said he would have BP call me. When I reminded him that BP is in fact a member of the Unified Command, the call taker abruptly said, he'll have BP call me.

If you live in the Gulf Coast, please take pictures or videos of the oil slicks. We just wrote some iPhone, Android and Blackberry software that will help you document the damage. It is specially useful if you're a boat owner or clean-up volunteer to take pictures and video. Please note time and place. Some smart phone cameras' GPS chip will record location even when there is no cell signal.

In light of these allegations of picture and image blackout, it is specially important for people to take pictures but PLEASE, if you find wildlife along the Gulf Coast that you think may have been injured by the oil spill, do NOT attempt to rescue it. Call the Oiled Wildlife hotline at 866-557-1401.

Documentation of the damages is going to be critical to the people of the gulf coast. Before and after pictures and videos will be particularly helpful.

Feel free to download the apps. They are free.

If you have a regular digital video or still camera, up load your images to: http://gulfcoastspill.com

Huge shout out to our developer friends at Intridea and UK-based Heamish Graham from Swoosh Software!

We now have a special Twitter client to help organize all the tweets and other social network information on the spill. You can also try the special twitter app at Tweeb.us. Shout out to Invention Arts of San Francisco.

Share this article with your friends by sending this URL: http://foo.am/gBj

The site is an all-volunteer effort and a work-in-progress and we'll be installing search image capabilities soon. DO NOT SEND US MONEY at the Gulf Coast Spill Coalition! Donate to the Sierra Club, Greenpeace, Mobile Bay Keeper, SaveOurGulf.org or some other reputable charity of your choice. We are archiving all the pictures and video for full public use. We will soon have full search capabilities on all relevant pictures and video care of our friends at EdgeCase.