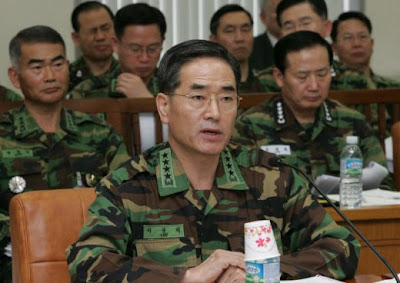 'Joint Chiefs of Staff Chairman Lee Sang-eui answers to the questions from lawmakers at the National Assembly, April 30.'

Hankyoreh
June 11, 2010
Wide-ranging incompetence and cover-ups took place night of Cheonan sinking, audit reveals : A number of observers believe that the announcement of audit results only presented an abbreviated version of the findings

It has come to light that Joint Chiefs of Staff Chairman Lee Sang-eui was heavily intoxicated on the night of March 26 when the sinking of the Cheonan took place. This represented an effective surrender of his command responsibilities. It was also revealed that military authorities willfully revised the time of the incident in order to avoid criticisms about an improper early response and edited only a portion of its thermal optical device (TOD) videos for disclosure to the media in order to justify the erroneous announcement of the time.

* For other new helpful articles, see below.

Photo Gallery: The Wreckage of the Cheonan-Spiegel Online
(thankfully informed by M. Reiss)

DMZ Hawai'i :How does Rajin-Sonbong factor into the Cheonan-sinking controversy?
Posted by NO Base Stories of Korea at 1:41 AM