Text Fwd: HOPE IS FAR AWAY 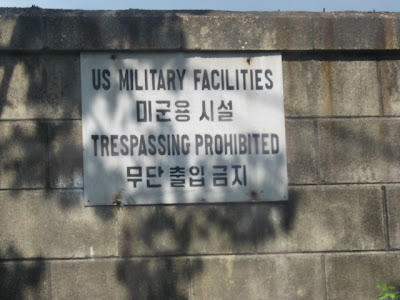 The wall along the base. 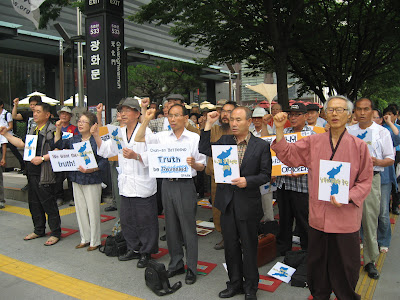 Yesterday's action outside the U.S. Embassy. The embassy faces the South Korean government building - a symbol of who is really in charge. 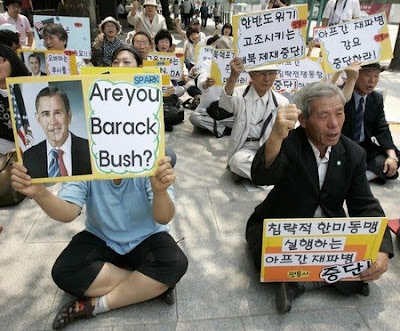 A photo from one of the monthly vigils outside the U.S. embassy in Seoul

We spent the day inside Seoul yesterday attending a couple different events. First we went to a 10th anniversary remembrance ceremony of the June 15 Declaration that was signed between the governments of South and North Korea that began to open up contacts between the people and family members. But in the last two years the right-wing government in South Korea of President Lee has begun to destroy those steps toward progress and he has resumed hostility toward the North.
Leading politicians from a couple different opposition political parties spoke at the event and after it was finished the former minister of unification came up to our delegation (which had been recognized during the ceremony) and introduced himself.
Following that event our delegation that includes Michael Lujan Bevacqua (Guam) and Shinako Oyakawa (Okinawa) went to a protest in front of the U.S. embassy that is held each month by Global Network affiliate group called SPARK (Solidarity for Peace & Reunification in Korea). SPARK began holding these regular protests at the embassy in 1999 and for a few years were met with arrests and beatings by their government. But persistance paid off and they are now left alone although the police were noticeably present.
At this protest, attended by about 100 people, they had reports on key issues including the recent sinking of the South Korea Naval vessel and reports from the U.N.'s recent NPT Review Conference. Peace groups and the public in South Korea remain convinced that North Korea had nothing to do with the sinking of the Navy ship which happened at the time of joint U.S.-South Korean war games aimed at North Korea.
After a wonderful lunch of grilled fish we were taken on a driving tour of the vast U.S. Yongsan Army Post that sits in the center of busy Seoul. The Army base is on both sides of hectic downtown streets and its stone walls with circular razor wire at the top is a visible reminder that this unwanted intrusion not only takes precious land but also makes the city a military target.
The South Korean Ministry of National Defense sits inside the Army base which well illustrates the fact that South Korea always has been a military colony of the United States. After WW II ended, and the Japanese colonizers were removed from power in South Korea, the U.S. put the Koreans who had been collaboraters with fascist Japan into positions of power.
The Korean War was essentially a civil war against those Japanese imperial collaboraters and those who had fought against the Japanese occupation and could not accept the U.S. as the new colonizing government. Since the Korean War never resulted in a peace treaty the war continues to this day with the U.S. still remaining in control of the South Korean government.
We were taken to dinner last night by leaders of the Pan-Korean Alliance for Reunification (PKAR). You might remember several postings I did late last year about the three activits from PKAR who had been jailed by the Lee government under the "National Security Act". Their crime allegedly was calling for national reunification and demanding that U.S. military bases in Korea be closed. After several months in jail they were released after the high court ruled that they had been illegally spied on by the government.
Many members of this organization had been jailed for many years due to their political work. One man at the dinner last night was in prison for 36 years. During the Korean War, as a 16 year old boy, he had fought against the U.S. and had refused to renounce his belief that the U.S. had become another colonizing power just like Japan had previously been.
One of the PKAR leaders told me that it would take the U.S. 1,000 years to make up for all the wrong they had done to North Korea. From the carpet bombing of the north during the war (the North Koreans had to live underground because virtually every building in the north was destroyed), to the present situation of perpetual preparations for war that has kept the north in a state of seige, the U.S. has prevented North Korea from fully developing much like Cuba has been prevented from doing the same.
Earlier in the day while at the U.S. embassy protest, one speaker from the political prisoners family organization told the crowd that "Our hope is very far away." There is much sadness in Korea as the nation remains divided and the U.S. displays no intention of ending its aggressive military control in the region. The U.S. likes having military bases in Korea because of its strategic borders with China and Russia. Control and domination of the region is most important and what happens to the good people on the Korean peninsula is of no interest to the U.S. war machine.
* For more photos, see HERE
Posted by NO Base Stories of Korea at 8:31 AM