U.S. What Do You Mean By ‘Blast Aboard the Cheonan’? : Korean Organizations Demand Re-Investigation Upon the AP Report.

# All the image source: Solidarity for Peace And Reunification of Korea (same as in the link) 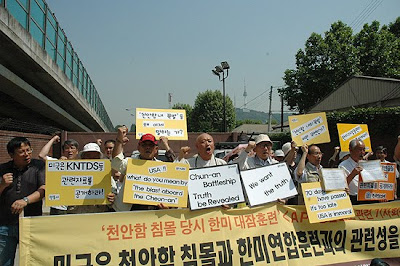 ‘ When the Cheonan Ship sunk, the ROK-US practiced on tracking [the mock enemy submarine]’
_Press interview related to the AP report

‘ Why the [USFK] talks about the ‘blast aboard the Cheonan’ now?

‘The United States should make public the related materials such as the KNTDs.”

The AP Associated Press reported on June 9 that the USFK officials officially announced that the ROK-US navy, having the practiced tracking ‘while a South Korean navy submarine played the role of target’ when the Cheonan ship was sunken. Upon it, the civil social organizations including Solidarity for Peace And Reunification of Korea, having the press interview in front of Yongsan USFK base at 10am, on June 9, with the topic of “The United States should announce the relationship between the sunken Cheonan ship and the ROK-US Joint Exercise,” delivered their inquiry letter to the USFK and Ministry of National Defense, demanding the close examination on the truth of the AP Associated Press.

Lee Kyu-Jae, Chairman of the PKAR, South Korean branch claimed that “ Through the Cheonan ship incident, The United States is trying to strengthen the presence of the United States Forces in Japan, to make asleep of the anti-US sentimentality inside South Korea, and to attempt the permanent presence in the Korean peninsula.” 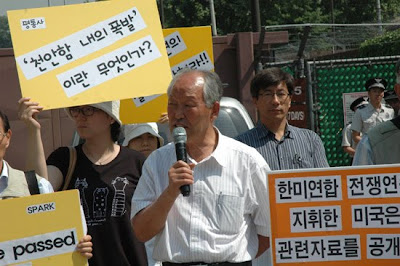 Yoo Young-Jae, Director of the USFK Natters, SPARK announcing that , “There came the important press report on the truth of the sunken Cheonan ship incident,” introduced the content of the AP article that says ‘The U.S.-South Korean anti-sub exercise [..] ended at 9 p.m. the next day, Army Col. Jane Crichton, a spokeswoman for U.S. forces in Korea, told the AP. The exercise was terminated because of the blast aboard the Cheonan.’ 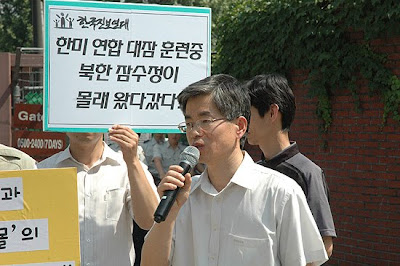 Director Yoo saying, “The content of the AP report is contradictory to the announced report on the investigation result by the ROK military and Lee Myung-Bak government, is an important fact to examine the truth of Sunken Cheonan ship, and the grave reason to re-investigate on the result of Cheonan ship that was defined as due to North Korea’s torpedo attack.”