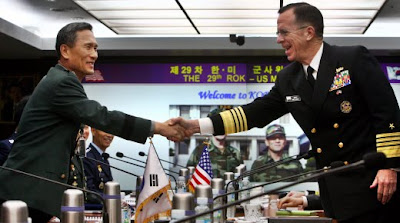 'Officials from South Korea and the United States shake hands with each other during a meeting to discuss the transfer of wartime operational command at the Ministry of Defense in Seoul’s Yongsan district, November 2007.'
Hankyoreh
OPCON transfer delay signals abrupt strategic change Experts say if S.Korea is the first to request a delay, it will likely have to accept a number of significant military and economic concessions
Posted on : Jun.24, 2010 12:28 KST

The decision by South Korea and the United States to discuss postponing the transfer of wartime operational control has signaled a sudden change in direction in consideration of the bilateral announcements issued in the interim. The two countries will discuss delaying the transfer of operational command during the upcoming summit between President Lee Myung-bak and U.S. President Barack Obama in Toronto, Canada on June 26 (local time).

Since the launch of the Lee administration, neither South Korea nor the U.S. government has once officially mentioned the need to delay the transfer of operational command. It is completely illogical that South Korea, which cries “Global Korea” with the national strength to host even a G20 summit, is volunteering to remain the only nation in the world to entrust operational command to a foreign military.

First, the change in the situation that would delay the transfer is not clear. The Cheong Wa Dae (the presidential office in South Korea or Blue House) and others have stated that we need to delay the transfer of wartime operational command because there is the concern that the North Korean threat is growing. They have said that the torpedo attack on the Cheonan combined with the nuclear and missile issues means that the dissolution of the Combined Forces Command in accordance with the existing agreement could convey the wrong message to North Korea and lead to a failure of deterrence.

When the transfer of operation command was agreed upon in 2006, however, overall consideration was made of the North Korean military threat, including nuclear weapons and missiles. One figure who handled the transfer issue with the Roh Moo-hyun administration said at the time that the United States said there would be no losses in South Korean security if the transfer was made in 2010. However, the South Korean military, through a conservative judgment of the security situation, called for it to be delayed until 2012, which the United States accepted.

South Korea’s conservative camp has continued to stress the “anxiety about security” that has amplified since the sinking of the Cheonan, but many point out that it is unreasonable to link the sinking of the Cheonan with delaying the transfer of operational command. In an opinion poll on the transfer of operational command conducted by the the Korea Institute for Defense Analyses (KIDA) of 800 adult men and women nationwide on April 24, one month after the sinking, 48.8 percent of respondents said the transfer should be made after 2012, considering the security situation. KIDA said even with these results, it would be difficult to accept the one-way logic that we must delay the transfer because of the Cheonan sinking.

Second, there is also the criticism that for Lee and Obama to discuss a delay in the transfer clashes with existing South Korea-U.S. summit agreements. In September 2006, then-presidents Roh and George W. Bush said the issue of the transfer was not to be decided by political factors, and that it was desirable to decide the schedule of the transfer through working-level negotiations between military authorities. Accordingly, a discussion over the transfer of wartime operational control should first take place at meetings between defense ministers or chairmen of the Joint Chiefs of Staff. In the five meetings between the South Korean and U.S. defense ministers that have been held since the launch of the Lee administration, however, no discussions of delaying the transfer have taken place.

Third, there is also great concern that if South Korea is the first to call for a delay in the transfer schedule, an agreement between nations, it would have to pay considerable costs to the United States. The United States has enacted a “strategic flexibility,” where it can deploy with mobility the U.S. military to spots around the world, as its military strategy.

Accordingly, in its Quadrennial Defense Review (QDR), released in February, the United States made clear statements in regards to accompanied tours (tours of duty accompanied by families) and fluid transfers to and from USFK. This was a reconfirmation that the transfer of operational command would proceed as scheduled so that USFK could be used as a rapid deployment force.

This is why there is criticism that if the United States agrees to delay the transfer, it is highly possible it will demand as a price broad concessions from South Korea such as pending bilateral trade issues, the negotiations to transfer U.S. bases to Pyeongtaek, South Korean overseas deployments such as to Afghanistan, and participation in missile defense (MD).

Please direct questions or comments to [englishhani@hani.co.kr]
Posted by NO Base Stories of Korea at 4:58 AM