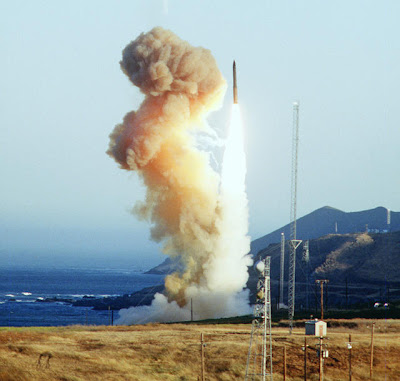 On June 6, 2010, the United States plans to launch a Minuteman III Intercontinental Ballistic Missile (ICBM) from Vandenberg Air Force Base on the California central coast. The missile will likely carry one or more “unarmed” warheads to the Ronald Reagan Test Site in the Kwajalein Atoll in the Marshall Islands.

The launch, the first of two planned for the month of June, will come just nine days after the completion of the nuclear Non-Proliferation Treaty (NPT) Review Conference at the United Nations.

Nuclear Age Peace Foundation President, David Krieger, who attended the NPT Review Conference earlier this month, said, “U.S. testing so close to the end of the NPT Review Conference will make many countries doubt our sincerity in fulfilling our nuclear disarmament obligations under the NPT. President Obama has said that he wants to reduce the role of nuclear weapons in US security policy, but tests such as this one suggest that we are continuing with business as usual.”

Krieger continued, “When any country tests long-range missiles and nuclear weapons, it is more than just a test. It is a message to the world and perhaps to specific countries; it says in effect, ‘This is what we can do to you.’ If the US wants to lead the way to a world free of nuclear weapons, it needs to stop sending such provocative messages. In the US we are very aware of such messages when other countries test. We seem to have a blind spot in our thinking about our
own tests.” For more info contact Rick Wayman at rwayman@napf.org or call (805) 965 3443

There will be a protest at the front gate of Vandenberg on Saturday, June 5 at 1:00 pm to oppose the upcoming ICBM tests. David Krieger, President of the Nuclear Age Peace Foundation and Andrew Lichterman of the Western States Legal Foundation will speak at the event. June 5 is
“Nuclear Abolition Day,” with events promoting the abolition of nuclear weapons taking place in cities around the world. For more information on Nuclear Abolition Day, including the protest event in Los Angeles, please visit Nuclear Abolition Day Web Site