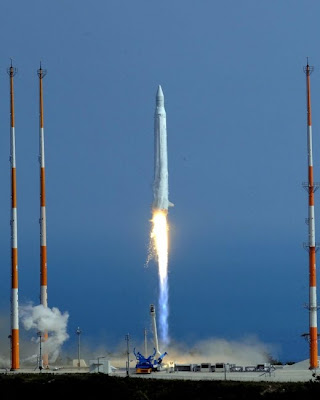 The Korean navy Friday recovered what is believed to be debris from the Korea Space Launch Vehicle 1 (KSLV-1) that exploded shortly after liftoff, Thursday.

According to officials at the Ministry of Education, Science and Technology, two pieces of wreckage were retrieved in international waters, south of Jeju Island, and were brought to Korean and Russian experts for further inspection.

However, engineers at the Korea Aerospace Research Institute (KARI), the country's space agency, will have limited access to the recovered material, as the technology standard agreement (TSA) signed between Russia and Korea bans any technology transfer regarding their joint project.

Hankyoreh
Posted on : Jun.11,2010 12:21 KST
Naro explodes shortly after takeoff Experts say the exhaustion of researchers and officials in order to expedite the rocket's launch may have led to careless mistakes
Posted by NO Base Stories of Korea at 1:54 AM