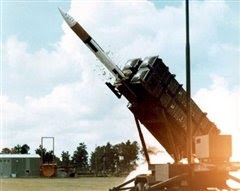 Russia's ambassador to NATO Dmitry Rogozin, warned on Friday that his country will not passively watch the deployment of a U.S. Patriot missile battery in Poland.

The US will supply the Patriots and 100 troops in Poland this year, to be stationed not far from the Russian Kaliningrad border.

"Do they really think that we will calmly watch the location of a rocket system, at a distance of 60 km from Kaliningrad?", the Russian diplomat said Friday.

Rogozin refused to clarify what the response of the Russian side would be to the deployment. "It is a matter for the military," is all he would say.

According to the ambassador, the decision to deploy Patriots in Poland is "reckless".

Rogozin said that Moscow is consulting with Warsaw and Washington on the matter, using both diplomatic and military channels. "We hope that the decision will be reviewed," he stressed.

Last Friday Russian Foreign Minister Sergei Lavrov said that he did not understand the plan to deploy Patriot missiles in Poland. “Why create the impression that Poland is strengthened [its defences] against Russia?"

Earlier, a Russian Navy spokesperson announced that Russia’s Baltic Fleet would be strengthened although this was not confirmed by the Kremlin. (pg)

Source: PAP
Posted by NO Base Stories of Korea at 1:05 AM