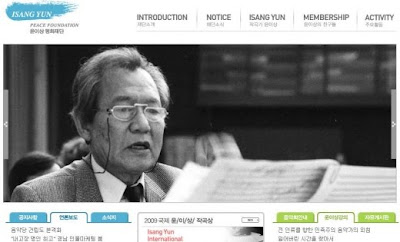 * Image source: same as the link below:
'A screen capture of the Isang Yun Peace Foundation’s website.'

Hankyoreh
NIS intervenes in Isang Yun memorial project:
IYPF staff say they are unsure why the NIS is showing ideological opposition to the project
A screen capture of the Isang Yun Peace Foundation’s website
Posted on : Feb.17,2010 12:08 KST

The memorial project for the late Isang Yun (1917-1995), the world-renowned composer, is reportedly amid a crisis as it faces cancellation due to opposition from the National Intelligence Service (NIS).

According to reports from Tongyoung City, South Gyeongsang Province (Yun’s hometown), Unification Ministry and Isang Yun Peace Foundation (IYPF) on Feb. 16, the memorial project, for which the city attempted to import a bust sculpture that was made in North Korea to South Korea, was not completed due to opposition by the NIS.

Tongyoung City requested through IYPF that the Research Institue for Isang Yun’s music (RIIYM) in North Korea send a reproduction of a bust sculpture currently located in RIIYM to South Korea. The city had put a locally crafted bust sculpture on exhibit independently, but it was removed due to the complaint that the sculpture did not resumble Yun.

An IYPF staff member said, “It is ridiculous that we have kept the bust of Isang Yun, the world-famous composer, stranded at Incheon customs.” The staff member added, “We cannot understand the NIS’s ideological reasoning behind their decision.”

Isang Yun was a musician who had lived and worked in Germany. However, in 1967, he was abducted from Berlin and taken to Seoul by the Korea Central Intelligence Agency (KCIA), the predecessor of the NIS under allegations of conducting spy activities for North Korea. He initially received a life imprisonment sentence, but was released in 1969 following strong international protest. Many critics have stated that the trial was a political stunt meant to strengthen the dictatorship of South Korea. During the former two administrations led by Kim Dae-jung and Roh Moo-hyun, memorable activities took place to memorialize him including the foundation of IYPF. The NIS, however, is seemingly changing its mind to oppose the memorialization of the well-known composer.

Please direct questions or comments to [englishhani@hani.co.kr]
Posted by NO Base Stories of Korea at 11:09 PM