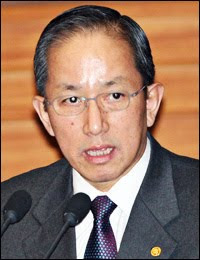 Referring to the planned transition of operational control (OPCON) of South Korean troops during wartime from the U.S. to Korean commanders in 2012, Kim said the military was putting forth the best efforts to take over OPCON in 2012.

He said the ROK-U.S. combined defense posture would be more effective in defending South Korea for the time being, given the lingering threat posed by North Korean missile and nuclear programs.

"I also hope that the U.S.-led defense scheme will remain further, given the North Korean nuclear and missile threat," Kim said at a lecture hosted by a naval defense research institute in Seoul.

"But the OPCON transfer is a promise between the governments, so if we ask to scrap the agreement, we must give away many things. If not, it's impossible," he said.

The minister anticipated that the year 2012 would be a "complicated" year, referring to North Korea's goal to become a "strong and powerful nation" by that time to mark the 100th birthday of the late North Korean founder, Kim Il-sung, and the planned presidential elections in South Korea and the United States.

Kim said President Lee Myung-bak and other diplomatic and defense officials were trying to deal with the controversy over the OPCON transition, hinting at a possibility of renegotiations with the U.S. government over the issue.

Seoul and Washington agreed in 2007 that Korean commanders would execute independent operational control of their troops during wartime beginning on April 17, 2012, with the U.S. military shifting to an air- and naval-centric supporting role.

The two governments plan to set up their own theater commands after disbanding the ROK-U.S. Combined Forces Command (CFC).

South Korea voluntarily handed over both peacetime and wartime operational controls to the U.S.-led United Nations Command at the outbreak of the 1950-53 Korean War. The command authority was later transferred to the CFC. Korea took over peacetime control in 1994.

Conservative forces regard the command changes as a U.S. move to reduce its security commitment to South Korea. They argue the smaller role of the U.S. military amid lingering threats posed by North Korea could tip the military balance on the Korean Peninsula.

Many defense experts say the South Korean military will not be able to establish an independent defense posture due to its lack of intelligence, surveillance and reconnaissance (ISR) assets until 2012.

gallantjung@koreatimes.co.kr
Posted by NO Base Stories of Korea at 2:45 AM