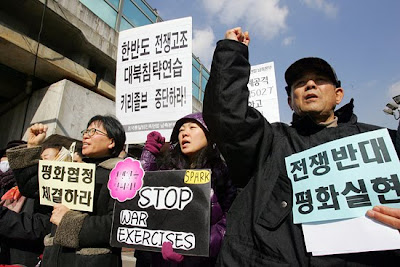 Signs say, 'Conclude the Peace Agreement!', ‘Stop the ‘Key Resolve/ Foal Eagle’,
an invasive exercise against the North Korea,
which heightens war in the Korean peninsula!’ and ‘No war, yes peace’ 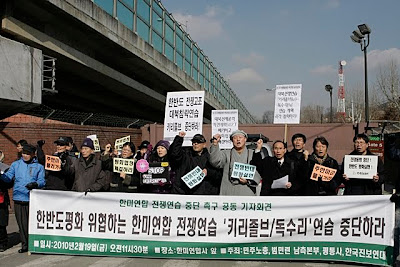 [Statement] Immediately stop the Key Resolve/Foal Eagle Exercise
that Threatens the Peace of the Korea Peninsula
And Dismantle the Invasive SK-US Alliance!
Walter Sharp, commander of the [SK-US] Combined Forces Command announced on Feb. 17 that the CFC would perform the Key Resolve/ Foal Eagle 2010 in all over the areas of the South Korea from March 8 to 18, in which 18,000 United Forces including 10,000 United States Forces of Korea and 8,000 augmented forces participate.

The Key Resolve exercise is the plan for all-out war whose invasive character is distinct as to stipulate its operational purpose as ‘removal of the North Korea regime’ and annihilation of the North Korean military. Because it is the war exercise aiming the occupation of Pyeongyang, the third stage of operational plan 5027, and occupation exercise against the North Korea, clearly aiming the collapse of North Korea, there have been North Korea’s strong refute and heightened tensions in the Korean peninsula, including the western sea whenever there progressed the Key Resolve exercises.

The long-time confrontation and division in the Korean peninsula have enforced much suffering to both of South and North Korea. Even though through the June 15 joint statement and 10. 4 announcement, the new chapter for the establishing the peace system in the Korean peninsula, including the improvement of the relationship between the North and South and mutual agreement for the normalization of the relationship between the North Korea and the United States, it is the situation that the chapter has almost been the blank paper, due to Lee Myung-Bak government’s two years hostile policy [against North Korea]. Specially even in the current when the talks about the [possibility] of summit conference, the Lee Myung Bak government is not giving up the hostile policy against North Korea, [talking] such as ‘revival’ of the plan for emergency situation, and with that, all over the areas of the Korean peninsula including the western sea are streamed with routine and heightened tension.

The US-SK alliance has been the passage to realize the war policy of the United States, specially the domination ambition in the North East Asia, in the Korean peninsula. The United States has tested her war plan in the Korean peninsula and utilized the South Korea as her war outpost. The Lee Myung-Bak government must immediately stop the Key-Resolve SK-US joint war exercise and dissolve the invasive SK-US alliance.


* Related blog
http://nobasestorieskorea.blogspot.com/2010/02/translation-fwd-sk-us-key-resolve.html
Thursday, February 18, 2010
[Translation Fwd] 2010 SK-US Key Resolve Military Exercise would be March 8 to 18
Posted by NO Base Stories of Korea at 1:54 PM