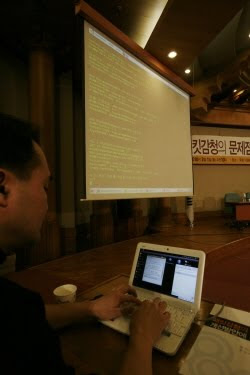 * Image source: Same as the below link

On Feb. 1 in the National Assembly’s discussion room, a computer screen displayed a dialogue between two Internet users who engaged in a conversation using different computers through MSN messenger. Participants in the discussion over packet eavesdropping were easily able to read the dialogue by connecting to the Internet users’ Internet line through a program called ‘Wire Shark.’ The discussion participants were also able to view the contents of e-mails sent through Internet portals such as Daum and Naver. The screen also displayed the revealed passwords as well as user IDs.


Please direct questions or comments to [englishhani@hani.co.kr]
Posted by NO Base Stories of Korea at 4:58 PM