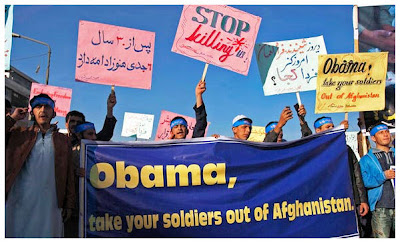 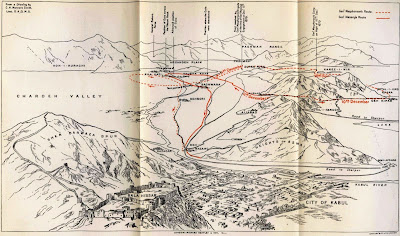 Kabul/Jalalabad—Hundreds of people, mostly students rallied in central Kabul and eastern Nangarhar provinces against the killing of civilians in foreign forces operations.

Four civilians were killed during an operation of NATO forces in Baghlan and eleven, eight of them schoolchildren, were killed in eastern Kunar and 13 others were perished in an overnight air raid of NATO-soldiers in Laghman province.

Activists of youth branch of Jamiat Eslah (Afghan Society for Social Reform and Development) staged a demonstration in Kabul, condemning the airstrikes and demanded withdrawal of the troops.

“If Afghan government did not stop civilian killing, it would lead to national upraising against foreigners,” chief of the youth branch Dr. Syed Khalid Rashid said.

The demonstration was attended by hundreds of youths, including university students and professors of Kabul University. They passed a resolution asking ISAF soldiers to leave Afghanistan.

The resolution urged Afghan government and the law-enforcement agencies to seriously probe the killings and bring the perpetrators to justice.

It also asked the United Nations, human rights watchdogs and international community not to stay silent over the killing and massacre of Afghan civilian.

A similar protest demonstration was carried out in eastern Nangarhar province, bordering Pakistan.

Students of the Nangarhar University who staged the demonstration chanted slogans against foreign soldiers and Afghan government.

The protestors blocked the Sehat-i-Ama Square against traffic for two and a half hours. Speaking on behalf of students, a student leader Safiullah said: “US soldiers have intentionally killed the schoolchildren.” Another student Hanifullah urged Afghan government to order the international troops to leave the country.—NNI