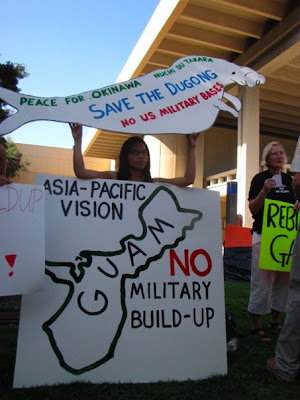 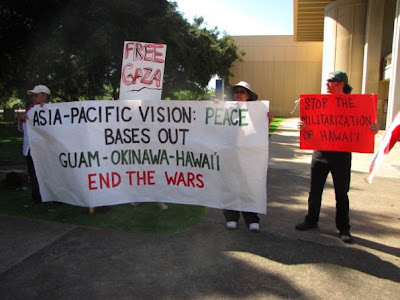 Protest greets Clinton in Hawai'I, solidarity with Guam and Okinawa

Today in Honolulu, a lively protest outside the East West Center greeted U.S. Secretary of State Hillary Clinton, who delivered a speech on the U.S. vision for the Asia-Pacific region. Protesters represented a wide range of groups and issues including anti-bases movements in Okinawa, Guam, The Philippines and Hawai'i, Palestinian support groups, peace and anti-war groups and Hawaiian sovereignty groups.

Col. Ann Wright (Retired) and the American Friends Service Committee - Hawai'i called the action with very short notice to send a message to the Obama administration that the peoples of the Asia-Pacific demand peace, not endless war and militarization.

A critical issue for Clinton on this visit was the disagreement between the U.S. and Japan over the fate of U.S. military bases in Okinawa. Earlier in the day, she met with Japanese Foreign Minister Katsuya Okada to discuss Futenma air station, but was unable to reach a deal.

The U.S. has urged Japan to stick to an earlier agreement negotiated by the previous Japan and U.S. administrations that would relocate Futenma base to the pristine coral reefs of Henoko, Okinawa, and move thousands of marines and other facilities to Guam. However, the new ruling Democratic Party of Japan (DPJ), which recently ended a fifty-year reign by the conservative Liberal Democratic Party, has called for abandoning the agreement and seeking the complete removal of the Futenma base from Okinawa. The Japanese government has delayed its decision on the fate of the Futenma air station. If Futenma were to be moved off of Okinawa, it would most likely be relocated to the American colony of Guam, although the Japanese government has been scouting several of Japan's smaller off-shore islands as possible relocation sites.

However many of Guam's indigenous Chamorro people are deeply concerned about the devastating environmental, cultural and social impact of the proposed military expansion. They feel that Chamorro culture would drown in the flood of militarization. Ongoing public hearings on a Draft Environmental Impact Statement for the proposed buildup have been packed, with the overwhelming majority opposing the military expansion.

Today's demonstration in Honolulu highlighted solidarity between movements in Hawai'i, Okinawa and Guam and called for a different alternative: the reduction of the U.S. military footprint in the Pacific. This would allow for bases to be removed from Okinawa, without moving the impacts and problems to Guam, Hawai'i or another location.

Kisha Borja-Kicho`cho` and Angela Hoppe Cruz, Chamorro students at the University of Hawai'i, sang a song in their native language. Borja-Kicho'cho' also recited an angry poem opposed to the military expansion. "We don't want your military bases!" she said over the bullhorn as Clinton was greeted at the East West Center.

Ann Wright said "We want peace in the Pacific, not more militarization and wars. Get your bases out of the Pacific!"

Prior to Clinton's arrival, security was thick. Only invited guests were allowed within 100 feet of the Imin Conference Center. However the line of banners and signs were visible to the attendees, and demonstrators chanting "Stop the wars! Bases Out!" echoed between the buildings as Clinton was whisked from her car. The chants continued to disrupt the event until security gave a final warning to the group to turn off the bullhorn.

The main banner read "Asia - Pacific Vision: Peace", "Bases Out - Guam - Okinawa - Hawai'i", and "End the Wars." Another sign out in the shape of the endagered Okinawan Dugong, said "Peace for Okinawa", "No Bases in Okinawa", "Save the Dugong" and "Nuchi du Takara" (Life if most precious). Another sign had the outline of Guam with "Asia - Pacific Vision, No Military Build-up". Groups also held signs opposing the militarization of Hawai'i, calling for an and to the wars and torture, and calling for the U.S. to stop supporting the Israeli occupation of Palestinian territories. One demonstrator waved the upside-down Hawaiian flag, a sign of the nation in distress.


Other coverage of Clinton's visit and the demonstrations:

Hawaii News Now mentioned the demonstration: "Protestors also showed up. About two dozen people held anti-war signs and chanted to attract attention. They weren't allowed in to hear the speech." The full story is here:

The Honolulu Advertiser coverage of Clinton's visit is here:

In an AP article published in the Honolulu Star Bulletin, the headline was failure: "Clinton accepts Japan's delay on US base decision"

Posted by NO Base Stories of Korea at 8:18 AM