* Below is the arbitrary translation of the Tongil News article (in the link). All image sources are Cho Sung-Bong, Tongil News. 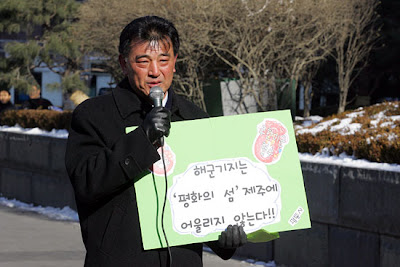 ▲ While the Jeju naval base construction business decided the date for the ceremony to start work on the naval base construction, Kang Dong Kyun, mayor of the Gangjeong village people’s council, saying on Jan. 12,
“The struggle is likely to be in earnest from now on,” expressed his will that, “We will never lose.”
[photo by Cho Sung-Bong, Tongil News]

* The sign mayor Kang holding says, “The naval base does not fit to the Island of Peace”, Jeju.

“ The struggle will be in earnest from now on. It is heard that the [South Korean navy] will do the ceremony to start work on the naval base in a few days and the ceremony to set up the construction in March. We have been in tent vigil in the planned area of the naval base since last Jan. 7. Since [the navy and Jeju island government] is trying to push the work with the construction trucks and to do the ceremony, I am blocking them with the village people.”

The ceremony to start work on the Jeju naval base construction was decided to be Feb. 5. As the Jeju base business committee of the navy, despite the public opposition poll in the area, announced its will to enforce the ceremony to start to work on Jan. 12, the conflicts surrounding it seem to be intensified.

Mayor Kang Dong Kyun who participated in the ‘124th Self-Reliance Unification Peace Action’ near the United States embassy, Gwangwhamoon, Seoul, during the day, has constantly performed the opposition activities [against the naval base] since April 26, 2007, pointing out the problems of the naval base construction business. While he almost gave over his wife his occupation, it has been more than two and a half years that he has concentrated into the activities with the villagers.

Mayor Kang Dong Kyun was clearly piercing through the behind of the Jeju naval base construction business of which [the navy and government claim] to bring up as the ‘civilian-military complex tourism-beauty harbor’, than anybody. The Jeju naval base business committee is planning to pay 958 billion won [about $831million] by 2014 to construct the naval base where 20 naval vessels including the Aegis Destroyer and two cruise-the biggest would be 150, 000 t level –could be moored at the same time, in the area of the Gangjeong village, Seogwipo city.

He, saying that, “ If there enters the naval base in the Jeju Island, all the powerful countries will concentrate their attention to the Jeju island,” worried that “Then, it can not be the “Island of Peace” but the “Island of Tension.” 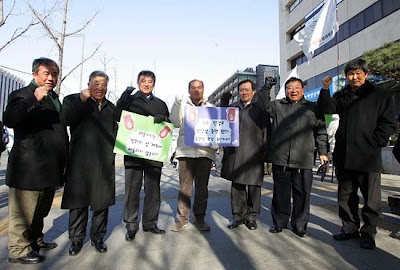 ▲ Mayor Kang and villagers, seeing Mr. Joo Byung-Joon, the Chairman of the Village People’s Committee
against the Expansion of the Mugeon-ri Military training Field on the day, greeted and encouraged each other. [photo by Cho Sung-Bong, Tongil News]
His affection to the village where he was born and raised up is more than the ordinary. The Gangjeong village, belonging to the Seogwipo city in the southern part of the Jeju Island is where the Gangjeong stream which is the inhabitant place for the sweet fish, and where the sea-split phenomenon happens twice a day, therefore the village is the renowned tourist place called with another name, such as ‘Island among the Island (Jeju Island).’

Mayor Kang told that, “The frontal sea of the Gangjeong village has been designated as the preservation area for the right of the life creatures, by the Cultural Heritage of the Administration of Korea, UNESCO, the Ministry of Land, Transport and Maritime Affairs, Korea and the Ministry of Environment, Korea. [The village] was also designated as the excellent village for the nature ecology. Should the naval base be set up in such place? We have responsibility to preciously preserve and inherit to our decedents, the place where our ancestors have beautifully taken care of, and have inherited to us.”

The Gangjeong is a small village where the villagers are only 2,000. However mayor Kang saying, “ About 80% of the villagers are against the naval base construction. At least 200~300 come out when I ring siren,” was proud of the unity among the villagers. He said that he came to Seoul with 5~6 village people, on the day, too.

Telling that, “The government and the Ministry of the National Defense, [abusing the law], wielding the systematic violence. However there is the way of human being before law, isn’t it? The government is ignoring the whole of these,” we, the Gangjeong village people will fight to the end. We need your encouragement.”