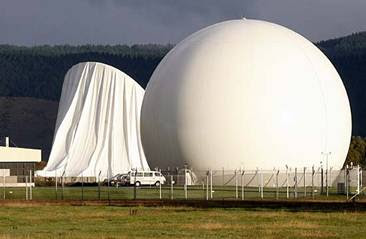 On April 30, 2008, three Ploughshares activists gained access to the base
and slashed one of the rubber protective domes with a sickle.

The giant balloon deflated slowly and draped over the satellite dish.

People from all around New Zealand will be converging on Blenheim and the super-secret Waihopai satellite interception spybase, in Marlborough, on the weekend of January 22-24. The war in Afghanistan, in which the NZ military is directly involved, has got dramatically worse and President Obama’s surge of 30,000 extra US troops will escalate it further. Already it has spread across the border into Pakistan. Hillary Clinton’s NZ visit this week is aimed at whipping America’s allies into shape and to get more troops out of the Key government, whilst simultaneously dangling a Free Trade Agreement as the “reward” – nothing has changed since Holyoake’s “guns for butter” catch cry of the Vietnam War years.

The theme of our activities, both at the spybase and in Blenheim, will be anti-war. The US says that Intelligence is the key component of all the wars that it is fighting, or planning to fight, throughout the world (Yemen is the latest target in this endless war). The Anti-Bases Campaign points out that Waihopai, an important source of intelligence for the Pentagon, is New Zealand’s most important contribution to the American war machine and it means that we New Zealanders have blood on our hands. To symbolise that, our props will include crosses, coffins and white masks.

This will be the first protest at the spybase since the April 2008 deflation of one of its domes by the Ploughshares peace activists. In solidarity with them, we will be popping white balloons at the base (and we will be at their Wellington trial, for the week starting March 8).

Waihopai, of course, is a “New Zealand” base – or so the Government says. The fact is, however, that in everything but name it is an outpost of American Intelligence – paid for by the long suffering NZ taxpayer. More than $500 million of public money has been spent on the NZ Government Communications Security Bureau (the agency which runs Waihopai) in the 22 years of Waihopai’s operation. That money could have been much better utilised on health and education, not spying on behalf of Uncle Sam.

On Saturday 23rd we will meet in Blenheim’s Seymour Square at 11 am. From there we will march through central Blenheim, with speeches at the band rotunda in the Forum.

This will be followed by a visit to the Waihopai spybase itself at 2 pm. Information will be provided on the function of the base and there will be a peaceful protest, calling for its closure. Speakers, either in Blenheim and/or the spybase, will be: Keith Locke, Green MP; John Minto, of Global Peace and Justice Auckland; and Murray Horton of ABC.

Waihopai does not operate in the national interest of New Zealand. In all but name it is a foreign spybase on NZ soil, paid for with hundreds of millions of our tax dollars, and directly involves us in America’s wars. Waihopai must be closed. (For details on Waihopai and what it does, go to our Website www.converge.org.nz/abc).