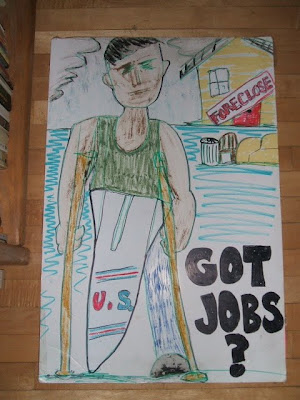 
*Press Herald file
Peace activists question the value of spending more money on new ships in a time of need.

In your Jan. 1 story on the Navy's DDG-51 destroyer made at Bath Iron Works, you quote a retired Naval officer saying that the ship is the "envy of the world."

These ships, outfitted with "missile defense" systems, are today being used to surround the coastal region of China.

The job of these ships is to take out China's 20 nuclear missiles capable of hitting our west coast. The U.S. Space Command has been annually war-gaming an attack on China in which the Aegis missile defense systems are used to pick off China's remaining retaliatory capability after our first strike.

Your article also mentions that the ships cost $1.2 billion each and that the work force at BIW has fallen to 5,500. We are often told that military spending is good for the economy.

But a recent study, "The Employment Effects of Downsizing the U.S. Military" by University of Massachusetts economics department, found that military spending actually creates fewer jobs than any other kind of investment.

The UMass study reveals that for every $1 billion of spending on military production, 8,555 jobs are created. But when that same amount of money is spent on home weatherization, 12,804 jobs are created, or when spent on education, 17,687 jobs result.

Current war spending is killing our economy. Almost $1 trillion has been wasted on the wars in Iraq and Afghanistan with no end in sight. Maine's share of these wars is now more than $2.4 billion. Just imagine how those funds could have been used in our state dealing with our budget problems.

Instead of spending our national treasure on war, the time has come for the public to demand real change. We must urge that our Maine elected officials speak out against continued militarism.

Bath
Posted by NO Base Stories of Korea at 8:13 AM