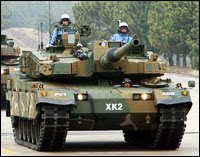 The planned production of homegrown K2 Black Panther main battle tanks this year has suffered a major setback due to a reduction of the related budget.

Among the arms improvement programs, K2 tank production was hit the hardest by the cut. The Assembly slashed 50 billion from the proposed 88.2 billion won for producing the new tanks this year amid reports over technical problems with the tank's "power pack" system.

The Agency for Defense Development began field trials of the domestically-built engine and transmission system in July last year but problems emerged during the tests, according to the Defense Acquisition Program Administration.

Originally, the production of some 390 K2 tanks was scheduled to begin after field trials to replace the Army's K1 tanks and its aging M48 Patton tanks.

In a parliamentary session on Dec. 10, Defense Minister Kim Tae-young admitted the problem with the K2 power pack, which is comprised of a 1,500-horsepower, 12-cylinder diesel engine and transmission.

Unveiled in 2007, the K2 is a major defense product for domestic needs and overseas sales. The K2 technology has already been exported to Turkey.

The K2 carries a three-person crew supported by an auto-loading system and a locally-developed 120-millimeter/55-caliber stabilized smoothbore gun. The fully-digitalized vehicle has an electric gun/turret driving system, automatic sensor input and power monitoring and control system.

Its 1,500-horsepower engine can power the tank to 70 kilometers per hour on paved roads and 50 kilometers off-road. It can cross rivers as deep as 4.1 meters, a considerable improvement over the K1 and K1A1, and fire as soon as it resurfaces.

The budgetary plans endorsed by the legislature include 14.2 billion won [about $13million]to introduce a presidential jet; 10 billion won to build Type 214 submarines; 9.1 billion won [about $ 8.7 million] to build a KDX-III Aegis destroyer; and 5 billion[ about $ 4.7 million] to construct a naval base on Jeju Island. [* According to the SPARK research, the budget, provided by the government for the dispatch to Afghanistan is 44 billion won which is about $40 million. The discussion on the agenda by the National Assembly on the dispatch to Afghanistan was delayed to February.]