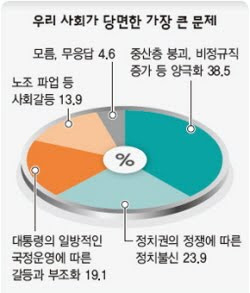 * Image source/caption: same as the link below

A recent survey shows that South Koreans regard polarization as the most significant pressing issue facing our society. The results also indicate that citizens want the Lee administration to focus most of its energies in 2010 on job creation policies that increase employment security.

A public opinion poll conducted by Research Plus commissioned by the Hankyoreh shows when asked what the biggest issue facing South Korean society at the present time is some 38.5 percent of respondents selected polarization resulting from the collapse of the middle class and an increase in irregular work. Some 23.9 percent selected a distrust of politics due to political disputes, 19.1 percent chose conflict and discord attributed to President Lee Myung-bak’s unilateral governing methods, and 13.9 percent chose social conflict resulting from strikes by labor unions and other causes.

A significant number of citizens indicated that they believe areas such as inter-Korean relations, media freedoms, human rights and the advancement of democracy have floundered or experienced regression during the Lee administration’s first two years. In particular, a majority of respondents selected skyrocketing private education costs and deteriorating working class livelihoods as areas of concern despite the Lee administration‘s emphasis on efforts to lighten the private education burden and pursue moderate pragmatism and working class-friendly policies.

Some 53.3 percent of survey participants said that their private education burden had increased over the previous two years. Another 33.7 percent said the burden was more or less the same as before, while only 6.5 percent said it had decreased. Although President Lee has made private education expenses a major area of education policy since taking office, the survey results indicate that South Koreans are not feeling the effects of the administration’s efforts.

A large number of respondents, 43.3 percent, said that media freedoms had deteriorated, while 42.2 percent said they were similar to before, and a mere 10 percent felt they had improved. The survey results the public‘s response to the parachute appointment of the YTN president, the improper dismissal of KBS President Jung Yun-joo, and the resignation of media personality Kim Je-dong that have become symbols of the Lee administration’s approach to media policy.

When asked how they believed conflict among South Korea’s citizenry had changed, 48.2 percent of respondents said it had increased. A smaller number, 37.2 percent, said it was similar with previous levels and 11.4 percent said it had decreased.

Meanwhile, some 56.7 percent of respondents expressed support for President Lee’s governance, with 11.0 percent responding with “a very good job” and 45.7 percent with “a good job in general.” Analysts suggest a favorable assessment and expectations regarding the President’s management of the economy have played a large role in his approval ratings. On the issue of President Lee’s management of the economy during his two years in office, the 53.8 percent who expressed favorable views, including the 6.3 percent who said he was doing “a very good job,” and 47.4 who said a “good job in general,” had a ten percentage point margin over the 43.8 percent that expressed negative views. Around 34.2 percent said President Lee had done a “poor job in general” and 9.6 percent said he had done “very poorly.” However, when asked about improvements in household situations over the past two years, 59 percent of respondents said it was unchanged, and 34 percent said it was worse.

The nationwide telephone survey of 1,000 adults age 19 or older was conducted over a period of two days starting Dec. 29 and has a plus or minus 3.1 percent margin of error with a 95 percent confidence level.