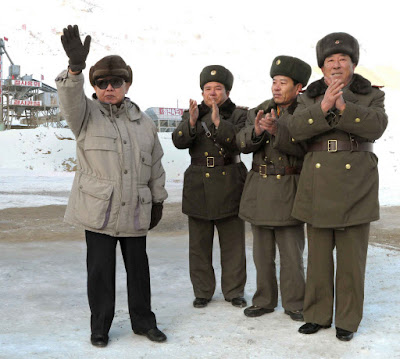 The 2010 outlook on the Korean Peninsula is a somewhat bright one. As we recall, last year started off with tensions high and a possibility of a military clash between North Korea and South Korea. We are astonished at how much has since changed.

Contributing to this favorable outlook is that will be no regime change in the administrations of South Korea or the U.S. serving as a factor of instability, as they did in 2008 and 2008, respectively. According to an open-ended questionnaire administered to 42 scholars and former high-level officials on inter-Korean issues, conducted annually by the Hankyoreh and the Institute for Far Eastern Studies, the forecast suggests a high probability of a third inter-Korean summit within the year.


Most of the survey’s respondents pointed out the key factor in the realization of a third inter-Korean summit is the South Korean government’s intentions. The experts and former high-level officials anticipate that if the Lee Myung-bak administration stops adhering to an insistence on denuclearization as a prerequisite for dialogue, a third inter-Korean summit could take place.

Out of a total 42 respondents, 31 responded to this item. Out of these 31 responses, 17 respondents, including Su Hoon Lee, director of Kyungnam University’s Institute for Far Eastern Studies, offered a positive outlook without provisions. Another seven respondents, including Kim Yong-Hyun, professor of North Korean studies at Dongguk University, attached the provision if the Lee Myung-bak administration took on a flexible attitude. Among these 24 respondents, four experts, including a former vice chairman of the National Intelligence Service (NIS), advocated for a summit by writing the response, “South Korea needs to participate in a third summit in order to strengthen our position during the process of resolving the nuclear issue.”

In contrast, seven experts, including former Unification Minister Kang In-duck offered a negative outlook by selecting the response, “As of now, there is no possibility of a third summit.”

The responses given by the experts this year significantly differ from those in years previous. Whereas experts have previously selected North Korea as a core factor in determining inter-Korean relations, the response given by the majority this time suggests the Lee Myung-bak administration is the core factor determining whether a summit will take place.

Moreover, considering the current situation of the Korean Peninsula and North Korea’s intention to enter into direct dialogue with the U.S., also noteworthy in the survey’s results is how 22 respondents selected the statement, “There is no reason for North Korea to reject the summit proposal.”

A few experts opted to write responses that point to other factors that contribute to the possible realization of a summit. Koh Yu-hwan, professor of Dongkuk University, made the statement, “Improvements in the nuclear issue is a prerequisite for a summit.” Former Unification Minister Chung Sye-hyun made the statement, “The Lee Myung-bak administration should respect the June 15 Joint Declaration and October 4 Declaration.” Chung Chang-hyun, president of Minjok 21, a monthly magazine on the North Korean issue, chose to write, “The abductee issue is the biggest obstacle for the third summit.”